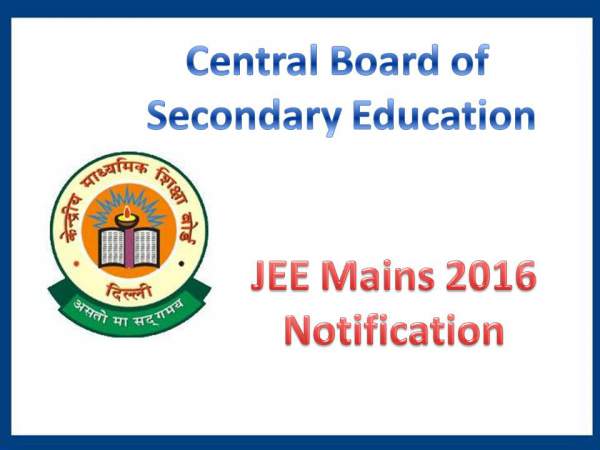 JEE Main 2016 Rank List jeemain.nic.in: JoSAA, the Indian Institute of Technology (IIT) and Central Board of Secondary Education (CBSE) are going to release the JEE Mains Rank (AIR) List 2016 of entrance examination. Around 1.1 million candidates who appeared in the test are eagerly waiting for it. (check: TS Inter Results 2016.)

Releasing the list of ranks is the second step of the results part. It involves getting admissions on a total of 34,781 seats for 629 different courses in all the 23 IITs, 31 NITs, 18 GFTIs, and 20 IIITs this year. The admissions in these reputed colleges and universities will be provided on the basis of ranks obtained.

There is a total of 10,375 seats in all the IITs combined this year to be filled. NITs have 18,013 seats in total. All of these seats are to be filled through JoSAA. It will be based on the JEE Main rank 2016 achieved by that particular candidate.

The results for both JEE Mains and JEE Advanced have already been released in the month of May and June this year. It’s now time to start the admission process in the participating colleges of the JoSAA.

The full form of JoSAA is the Joint Seat Allocation Authority, which has been set up by the HRD Ministry. It will enable the smooth flow and regulate the joint seat allocation process in over 92 participant institutions.

The joint counseling will take place on 24th June, just after the declaration of the JEE Mains list of rank. It will be made available on the official website of the Joint Entrance Examination – www.jeemain.nic.in, cbseresults.nic.in, and josaa.nic.in today, June 23.

To know the ranks, the candidates who participated in the test will be able to check it by logging into their profile. Before logging in, keep roll number and other important details handy.

More than 1.3 million candidates participated in the entrance exam JEE Mains, which was conducted on 3rd and 9th April via online and offline mode. Out of those only 1,98,228 aspirants qualified for the JEE Advanced. Then, 1.6 lakh participated in the Advanced test. Thus, now the rank list of about 1.1 million will be published.

The result was announced as per the marks obtained by the candidates while the JEE Main rank 2016 list has been prepared based on a normalizing weightage to 12th class percent marks. The candidates will receive a rank on All India level and while the other rank will be based on category.

The JEEMain rank list 2016 will be published today on its official website. Then, the further process of counseling and seat allocation will be carried out.

Below we have the complete schedule for the same.

Stay tuned to for more and all the best for your JEE Main 2016 rank list. Don’t forget to share ti on social media sites.