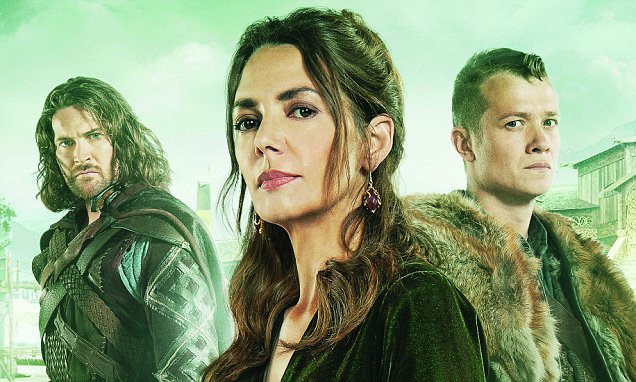 More was expected from this episode as we moved past the mid-point of the season, as some of the plot points are still unresolved and the ending was less dramatic than expected.

Directed by Colin Teague and titled “Episode 7”, the episode starts with Jogan’s bickering Wulfing raiders attacking Herot. They get away with some gold and Slean’s fiancé, Kela without realising how important she is to Rheda’s plans. Jogan’s sulky, wet son, Draven is captured in the raid. Rheda agrees with Jogan to bargain Draven in exchange for Kela. But at the exchange, Draven grabs Kela, then jumps on a horse and rides off with her. Seems likehe was trying to prove his worth to his father. His bemused dad follows him. Beowulf and Varr – suddenly revealed to be some kind of zen warrior, pursue Jogan, Draven and the kidnapped Kela. There’s a big fight in which Beowulf kills Jogan, Draven runs off, and Varr rescues the ungrateful Kela. The fight was certainly the highlight of the episode.

Meanwhile in Bregan, Saray reveals that she is an assassin sent to kill Abrican who fell in love with him instead. This turns out as a surprise to everyone, but appears to suit Abrican’s ego. Abrican sends Slean back to Herot promising to make him Thane when their plan to depose Rheda succeeds (but his expression when Slean’s back is turned tells another story). Abrican’s loyal henchman, Vlade, finds Draven and takes him back to Bregan, where Abrican strikes a deal with him to secure the Wulfings’ support in this plans to become lord of the unknown world (!!!), or a few hills and valleys in Northumbria, at least. Abrican kills Vlade then lies to Beowulf that Vlade was the cause of all evil and treachery in Bregan.

Even though fans expected more, the show showcased more spark and energy than they are used to from this show. Maybe, the action scenes were the reason for it. Also, increase in the level of treachery and plotting also piqued audience’s interest. I found the CGI effects as one of the downsides of the show. See for yourself and comment for further discussion.