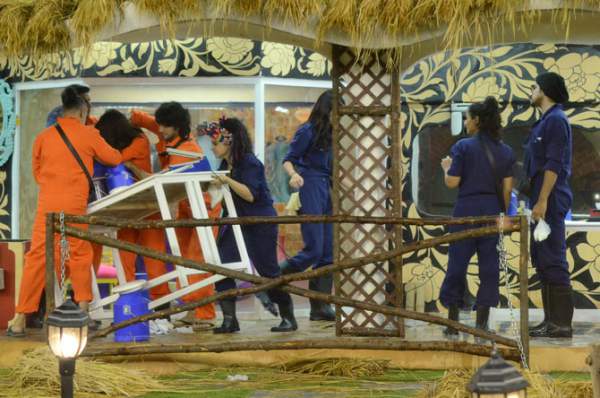 Bigg Boss 9 Day 44 Episode 44 24th November 2015: BB9 updates; let’s catch the highlights of what happened today on the sets/ inside the BB housemates. The main point to be noted from today’s happenings is that the new wild card entrant, Priya Malik accused Rishabh Sinha of getting sexual during the luxury budget task. See below, how other contestants reacted. (check: Kamal Haasan and Amala for business.)

BB made the housemates wake up to the song ‘Saat Samundar’ which suggested some changes later in the day which were visible after the entry of Priya Malik in the house. The day 44 kicked off with Priya and Rishabh having a causal conversation and discussing her tattoos. She revealed that her ‘freedom’ tattoo which she got in the age of 26.

Onlookers, Prince and Rochelle speculate that Rishabh is trying to impress the ‘new fish in the sea’, Priya, by giving her some extra attention. Prince further says that Rishabh is getting bullied by Mandana every now and them and how he is not realising this fact. Priya is trying to make Rishabh understand that Kishwer’s basic nature of being a dominating person which will never change and she is just using Rishabh to her benefit.

Later in the day, Bigg Boss announces the luxury budget task ‘Bigg Boss Dairy’ where the contestants are divided into two teams with Prince and Rimi being the team leads. Kishwer is appointed to be the sanchalak of the task. Prince’s team includes Rochelle, Kanwaljeet and Rishabh while Rimi’s team includes Suyyash, Priya and Mandana. The two teams are required to milk an electronic cow with the help of three nozzles and package the milk for final inspection. The milk pacts will then go through a hygiene check and the team processing maximum packets will be declared as the winner.

Both the teams immediately gear up and commence the task with a lot of enthusiasm. The luxury budget task also states that one member of the team will have to milk an artificial cow while the members of the other team will have to try to remove their hands from the cow’s udder. In a bid to remove Priya’s hands, Rishabh licks her fingers. Annoyed, Priya tells him that what he is doing is disgusting. Rishabh retorts saying he is not being physical to which Priya remarks that he is not being physical but sexual!

As the task proceeds, Priya starts creating a ruckus by blaming Prince and Rishabh for getting physical and breaking rules.

On the other hand, Kanwaljeet faces a backlash from the opponent team for passing inappropriate comments. Soon after, Priya and Kanwaljeet get into a verbal spat which further turns into a heated argument.

After facing brickbats for no participation in the task, Rimi seems to have finally come to terms with the housemates and is playing the task with utmost passion. On the other hand, frenemies Rochelle and Mandana have seen bonding and catching up with each other. Priya now counsels Prince after Rishabh by telling him that he needs to be the tiger who hunts alone and not get caught up Kishwer and Suyyash’s rut.