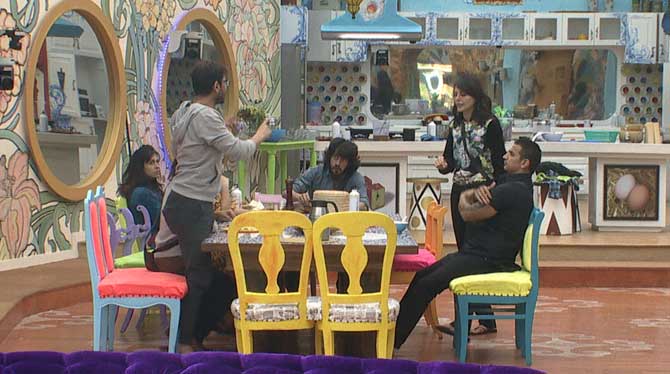 Bigg Boss 9 ‘Day 85’ 4th January 2016: BB9 updates; Let’s go through the highlights of today’s show and check out a little bit in detail about what happened today. Mandana repeatedly had verbal fights with Priya and the cool group. Eager to know more? Just scroll and read complete written update.

The day started with the waking up of the contestants to the tunes of the song “I am a Disco Dancer”. While having breakfast, Mandana escalated the topic that Priya shouldn’t have said anything related to her family and boyfriend even if she heard or overheard the conversation with Gaurav. Priya tried to explain that it was Rochelle who actually overheard and made the topic buzz.

Then Rochelle interfered the ongoing conversation and said that Priya has wrongly involved/quoted her in it. Priya confronted Rochelle by saying that she said this thing because Mandana was there in front of her. Priya also informed Mandana that Rochelle’s boyfriend Keith was there and he spoke about Gaurav. When Mandana confronted Keith, he said that he only voiced his opinion and nothing more than that. Moreover, he said that if she has anything, she should clear with Rochelle.

Later on, Rochelle came to fight with her boyfriend. She told Keith that he didn’t do fair as he didn’t support her during the verbal spat with Priya. Keith tried to sort out the matter by saying that he misunderstood the conversation which had taken place earlier. However, he apologized but she told him to leave her alone.

After a while, the captain of this week – Prince punished Mandana and Priya for conversing in English. He made them stood across each other with one’s own hand on other’s shoulders. Priya felt this punishment funny and was apparently distracted but tried to entertain herself.

Seeing her entertaining, Prince told her to take the punishment seriously and got angry with her. Priya to tried to defend her actions, but Prince got, even more, angry and ordered her to repeat the sentence. Priya got irked by his actions and then, she packed her bags and went outside the store room. Thereafter, she requested bigg boss to open the door.

Later in the day, bigg boss announced open nominations. The main door got opened for the second time this season. The open nominations were conducted in such a fashion which included writing the name of housemates on footballs which they were asked to throw out of the house.

Proceeding in the day, Keith found Rochelle who sat right next to him in the Sky Lounge. There, he apologized to her. During the evening time, Prince called Mandana there. Priya saw this and see commented ‘CoolGroup?’. She thought that Mandana has been successful in creating a place for herself in the Cool Group with her hard work.

Priya’s husband Bhushan gifted her a stole. She has missed placed it and searching for it for 2 days now. She asked other housemates if they had seen it. Later on, Mandana confessed to Rochelle and Kishwer that she once saw it when she hid something. Rochelle quickly guessed it and found Priya’s stole and gave it to her.

After Priya got her stole back, all the housemates guessed that probably Mandana hid it. They told her that it was unfair on her part. After that, Mandana tried to apologize to Priya but Priya said that she didn’t want to talk to her.