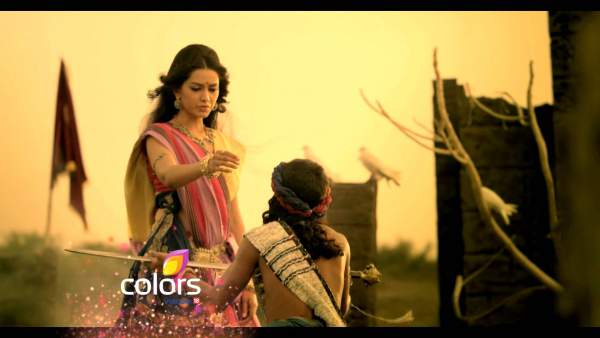 Chakravartin Ashoka Samrat 15th March 2016: The episode starts when Sushim asks his mother what to do now. Helena says she would do anything he says and kneels down. Charu does not mind who does it and only wants the task to be done. Sushim makes her stand. Helena has a plan, and she makes sure this would be the last attack on Bindusara from his son, Ashoka. Siamak comes to call them outside to see what’s happening. (check: All Episodes of Chakravarti Ashok Samrat.)

Bindu crowns Drupad Nanha Samrat of Magadh for a day. Everyone has to abide by his orders. He has been made Samrat for a day as a gift. Shushim calls it drama and looks at happy faces of Dharma, Ashoka and Kaurvaki smile will vanish. Bindu will be killed by Rajmata and Ashoka will be blamed.

Bindu tells Drupad to order. He finds it challenging and wants everyone to take part. He starts with Rajmata. Charu asks him to free Rajmata of any duties. He appoints Charumitra as counsellor and Dharma in the kitchen. He handover responsibility for a grand celebration on Sushim and Siamak. (check: 15 March Super Tuesday Results.)

Ashoka asks Drupad his task. He appointed him his bodyguard. Drupad says it’s time to play. All will hide I will look for you. Shubhrasi gets tensed why Samrat became a kid with a kid. Dharma finds it high so that he forget his worries and focus on killers of Acharya Chanakya.

Kaurvaki blindfolds Drupad as the game started. Charu asked Siamak to go outside and asks to make sure only Drupad finds us.Helena remarks that this time is not to fear and brings out the gift her father sent for Siamak.everyone started hiding. Drupad hears the anklet’s sound and catches her mother. In return she complimented.

Helena explains about the arrow and tells him to shoot at her. Charu reminds Sushim’s excellent archery. She challenges. Drupad came to the room but could not find anyone. She makes bangle’s noise. Drupal catches them.

Sushim shoots at Helena, but it changes direction. Charu ducks to save herself. Helena informs arrow hurts the person standing next to the target. Drupad caught Siamak and searched Rajmata.

Sushim thinks how to kill Samrat. Helena informs about the meeting with people.ashoka will hit Samrat with an arrow. Charu asks if Ashoka gets fail. Helena has a backup plan. Sushim appoints Inderjeet for his backup plan. Ashoka never loses his aim, but If so he will shoot.

Kaurvaki wants to take Ashoka with him as he promised to do anything. Drupad asks Ashoka to go with Kalinga’s princess. Outside, Kaurvaki reminded him his promise and requested to teach archery. He agrees. Sushim thinks Rajamata was right that when we focus our targets, chances comes forward.

Kaurvaki is shocked on noticing Sushim holding the bow. She says I can say a lot but wants to maintain the dignity of Magadh. Ashoka tells him that guests are treated well in  Magadh. Sushim taunts him that people in the jungle will tell the things. Sushim pointed out that he has been appointed Yuvraaj and can sort things.

Siamak hopes Sushim succeeds. Ashoka and Kaurvaki started going when Sushim hits Ashoka that what Kaurvaki be thinking. They heard the announcement that Bindu is coming that way. She again asked Ashoka to speak. Sushim taunts that his blood is not pure. He was, is and will be – Dassi-Putra. Ashoka said he did not want but now he accept  Sushim’s challenge