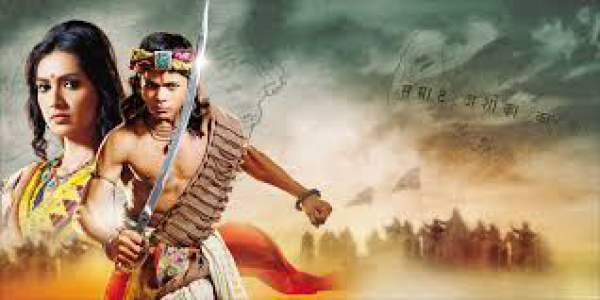 Chakravartin Ashoka Samrat 17th March 2016: The episode starts as Ashoka calls it a mistake and wants to see Drupad for last time. The soldiers tied his hands. Bindu leaves the courtroom. Ashok asks his mother to trust. Soldiers lock him in the cell. He requests them to allow seeing his brother once. They pay no heed to him. (check: Chakravarti Ashok Samrat Last Episode.)

Sushim tells Tantrik that he failed. Samrat is alive. Tantric says I said Samrat will die. Drupad was Samrat that day, so he died. You will become Samrat. No can stop you except me. We are one now. The blood that comes from your mouth is mine. Your blood will be slowly offered to Pishachs and replaced with mine.

Dharma asks Bindu if Ashok can do this. Bindu replied that arrow was shot by Ashoka. He has become greedy for the throne. Dharma has faith and says I know he has no greed. Bindu replies if you are right then why Ashok asked to be Yuvraaj. She talks about Chanakya’s dream. He calls Ashoka’s wishes going wrong. He cannot pardon Ashok. There is only one punishment-death. (check: CAS All Episodes.)

A soldier comes with Ashoka’s request to see Drupad. Shubhrasi cries and says it is wrong to sleep on your birthday. Get up son. Dharma comes there. Shubhrasi scolds her and says you will never be happy. Soldiers bring Ashoka. He cried. He thinks of past. Sushim thought Drupad did not support right people. He paid the price. Everyone thinks of Drupad. Kaurvaki looks how the body turns so black? Was it a plan?

Kauravaki talks to father about the condition and supports Ashoka. She says when the end is not right, it does not end. She meets Nayak and suggests Ashoka getting out of jail. Ashok talks to himself. I should not have accepted the challenge. Forgive me, Drupad.

Kauravaki comes with food for Ashok. She gives special paan to soldiers. They lose consciously. Few soldiers came. Nayak comes there. Kaurvaki asks Ashoka to come. He denies. She told that someone had poison on the arrow. It was a trap. You have to prove innocence to citizens.

Inderjeet shares that he put poison. Sushim applauds. Nayak handles soldiers coming. One soldier rings a bell. Everyone hears and knows Ashoka is missing. Bindu is angry. A culprit escaped. I have to get in Samrat mode now.

Kaurvaki and Ashok come to archery area. He is sure arrow must be where the father was. She calls it risky. Siamak comes there as soon as possible to look for Ashok. They hide till he goes to another side. Ashoka notices the arrow on the wall. Bindu glares at Ashoka.

In the courtroom, Dharma thinks Ashok is all alone. Chanakya always used to save him. Bindu comes. Helena calls Ashoka a traitor. Bindu says he will come back. He promised. Sushim asked Bindu about it.

Ashoka asks him if he thinks he can kill him. He said kill me right now if u think so, if not then give 3 hours. He will proof his innocence. If he fails, he will accept any punishment. Flashback ends.

Sushim asks how he could believe the one who killed Drupad. Bindu wants to wait 30 sec more left Ashoka asked for.