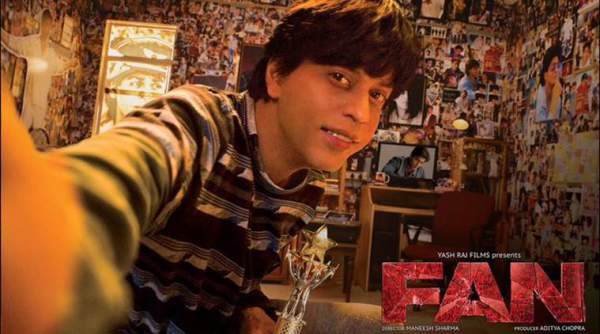 Fan Movie Review Rating: At last, after buzzing all over the Bollywood film industry and with high expectations, Shahrukh Khan starrer Fan film got released. It was one of the most awaited and much-anticipated movies of the year, 2016. (read: Theri review.)

Directed by Maneesh Sharma, the Fan review stars SRK in a double role. He portrays himself in one role of the celebrity while in another role; he plays a #fan of himself. With its release overseas, it has garnered positive reviews in high quantity from the critics as well as the audience response.

First of all, the movie released in the UAE market on Thursday, i.e., a day earlier its worldwide release. The UAE version has impressed the critics, and they have praised the flick. Many of them even said that it is a must watch talkie. The overview of the reviews is “first half is good, but the second half sucks a little’. Still, the critics are suggesting to watch it in theaters.

Below is what different critics have said. The fan review by Rajeev Masand, Taran Adarsh, Anupam Chopra, and Komal Nahta is added below.

As I left the cinema having watched the film, I found myself conflicted about my feelings. There is so much to admire here, but it’s evident the filmmakers think they’ve made a smarter film than they actually have. Still, Fan works for the most part. And anyone who – like me – had grown tired and disappointed with Shah Rukh’s unwillingness to step out of his comfort zone will have reason to be a fan again. I’m going with 3 out of 5.

On the whole, FAN has a brilliant first half, but loses track in the second hour, only to pick up again towards the pre-climax. The writing should’ve been tighter, while the absence of music [it’s a songless film!] may also prove a stumbling block, but what works, and works big time, is the terrific act by SRK as the fan. And that’s enough reason for you to watch this thriller!

On the whole, Fan is a good entertainer, not an outstanding one. Its first half is enjoyable but the post-interval portion is less entertaining and the climax is a big letdown. It will, of course, make profits but a long run at the cinemas is ruled out. Business in multiplexes and cities will be better than in the single-screen cinemas and small centres. Classes will like the film more than the masses.

Gulf News critic Manjusha Radhakrishnan said: “You can watch it if you are a die-hard #fan of Shahrukh Khan. However, you shouldn’t expect it to be something different. If you succeed in managing your expectations, you can survive through the film and walk home smiling after watching a stupid #fan and a faultless superstar.”

Sneha May Francis of Emirates 24/7 said: “The flick is entertaining, although looks like it is the Bollywood adaptation of the Hollywood movie with the same title. Habib Patel has written it, but the director has stretched it to over 150 minutes of screen time. Maneesh Sharma has tried to weave it, but the result is not entirely satisfactory.”

Kamaal R Khan (KRK) tweeted: “Maneesh Sharma Sahab, Ek Kahawat Hai, Ki Nakal Karne Ke Liye Bhi, Akal Ki Zaroorat Hoti Hai n it’s proved with your ch*tiyapa in #FAN. The whole world can learn from director Maneesh Sharma, how to totally destroy a film in the 2nd half with great nonsense. My 0* to the 2nd half of #Fan What a terrific n Zabardast film #FAN and what a great acting of @iamsrk! It’s Full of human emotions. My 4* to first half.”

Casting director Shanoo Sharma tweeted: “Watched #fan I am blown! I repeat anyone who forgot why they were an SRK fan will be…”

Below is what audience is sharing about the film after watching the SRK starrer.

Stay tuned and share your Fan review with us via commenting and see what others have shared below.