In the last Game of Thrones Spoiler we have revealed how Jon Snow, Daenerys Targaryen and Master Aemon are related to each other. In this article we would be trying to understand the relationship between Jon and Gendry.

Gendry is the ironsmith in whom everyone has some interest. Lord Stark might be aware that Gendry had the king’s blood. Melisandre was quite aware about the fact and bought him to Stannis’s army in exchange of some gold. In an failed attempt to kill Joffrey, Robb and Balon Greyjoy Melisandre plans of spending good days with Stannis.

Gendry is son of Robert which was revealed in the Season 1. 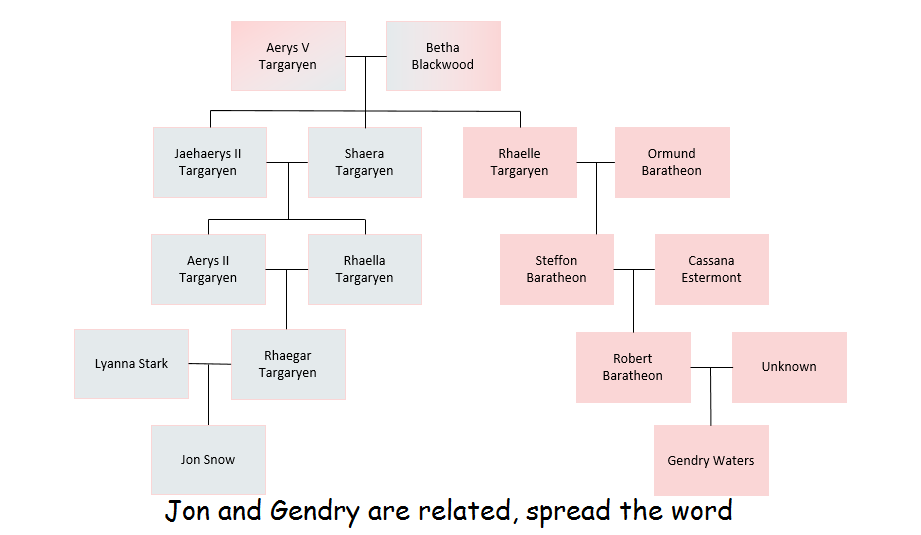 Rahelle Targaryen decided to marry Baratheon which started a new destiny in westeros. Robert was the possibly known last king from Baratheon family alive with the king’s blood. Cersai didn’t belong to Baratheon house (She was married to Robert but had children with Jaime).

Coming back to the story, Robert have 17 bastard sons excluding Gendry in the Game of Thrones. It would be interesting to know whose names will connect the wires with Baratheon family in the next episodes.

Game of Thrones Spoilers from Books.

Aegon V Targaryen was a Lord of the Seven Kingdoms and the fifteenth Targaryen to sit the Iron Throne who married with Queen Betha Blackwood, known as Black Betha.

Gendry most probably got the skills of having sharp edge over the weapons from his mother. There is no introduction of his mother in the TV series but it appears her character may make an entry very soon from Samwell’s study. Samwell has gone to study about valyrian steel and the way to fight enemies from the north.

So far we know that Jon and Gendry are related to each other. We have seen a lot of theories governing that Season 7 is going to happen about forming alliances to fight the common enemy.

Gendry is the most underrated character as of now in entire Game of Thrones. He might come up with something really fascinating. Its pretty much sure that Jon couldn’t fight the enemies with one valyrian steel sword which makes Gendry presence even more important as an ironsmith.