The Reporter Times
Home Entertainment Hangover 4 Release Date, News and Everything We Know So Far

Hangover 4: The combination of Doug, Phil, Alan, Stu, and Mr. Chow have made the Hangover movie franchise a memorable name to remember in the film industry. It’s being praised too. The movie was full of the comic yet realistic scenes and punchlines and on the top of it, all the characters that were portrayed were too good which leaves an immense feeling to watch the next part, the Hangover 4.

Lately, it was believed that Hangover3 will be the last part of the franchise. However, a movie poster from Hangover4 went viral online giving fans hope to see Phil and gang on the big screen soon again. That poster features Phil, Mr. Chow, Stu, and Alan. The tagline appears to be “Wolfpack never dies” as you can see from the poster.

[pullquote]Update 2018: During an interview, Ed Helmes ruled out any possibility of an upcoming sequel. He said that the chances for the fourth movie are between zero and zero.[/pullquote]

Fans are going crazy for H4 after the poster went viral. Fan theory says that this time Alan will the center of the movie taking a hint from the alleged movie poster which showed Stu’s brother in law leading the wolf pack. Alan, Stu, Phil, and Doug always ends up in some in some trouble while searching for some good time to spend together. 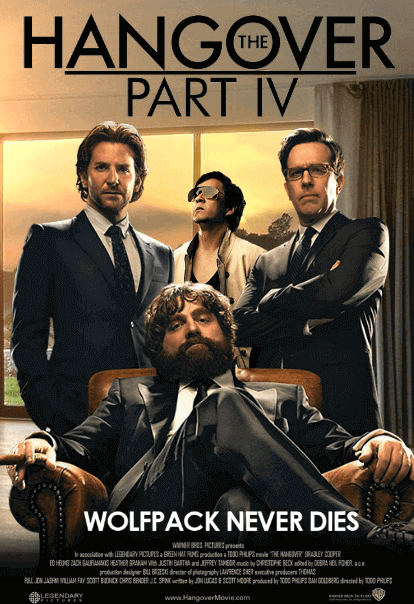 Although the fans are eagerly waiting for Hangover 4 updates and further details. Now it appears as the movie poster was all fake. Reports say that Bradley Cooper who plays Phil in the franchise said that the franchise ends on the third installment. The actor is now busy with his own projects with Limitless season 2 TV series on the top of the list.

Cooper, once, joked that he would do the part 4 once there is peace in the Middle East first. He had previously announced that the franchise will have only three parts.

Zach Galifianakis who plays Alan in “TheHangover” movie is a part of “The Lego Batman” film which has been released in February 2017. We hope to see “The Hangover 4” soon too. Do you think the fourth installment in the franchise is possible? Let’s know your thoughts via comments.

Keep visiting TheReporterTimes for each and every update.