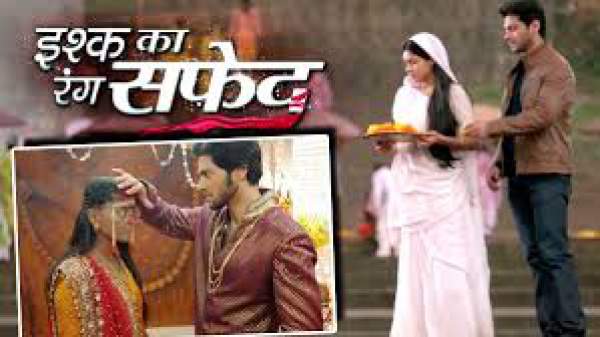 Ishq Ka Rang Safed 19th March 2016: The episode starts with Raja’s mum telling him that she stopped wedding without intention to stop it. She says we don’t have money and your brother lost money in gambling. Mami says she would have stolen good things if she knew. Raja assures he will marry and will earn lost money and respect. (see: IKRS Last Episode.)

Viplav apologies Dhaani and says why she didn’t tell before. Dhaani said I told when I brought kada. Viplav says I was unwell and slept and says to tell everything. Dhaani told she got married to Avasthi family, her husband come drunk every night and beat her.  She abouts to tell but Viplav gets a call. He gets shocked and tells that Shalu tried to commit suicide. He leaves.

Viplav comes to Shalu. She says her life is ruined by dhaani, and Raja left after taking 4pheras. Viplav tells that he will make everything fine. She says that Dhaani is good but nobody thinks about me. She asks Viplav to go as she doesn’t want to talk. Viplav calls nurse as her hand was bleeding. Dhashrath says Viplav that you have paid good price to my upbringings.

Dulaari comes back to ashram. Raj lakshmi asks if Dhaani really killed her husband? She slaps and says Dhaani haven’t done anything. She prays to tulsi plant. (see: IKRS All Episodes.)

Mami says that Dhaani ruined the game. Raja’s mum says nothing is ruined if Raja wants everything to be fine. She says to make Shalu believe we accept her as Bahu. Raja says we can show sympathy to them. Once I got married Suman can’t do anything. He says to come and start acting. Raja’s mum hugs Kanak. She goes to shalu and says God gave me a daughter and you are snatching yourself. Raja says everything will be fine. Shalu asks really.  Raja’s mum says yes. Viplav tries to speak, raja says if Dhaani apologises then I will forget everything.

Viplav says it is good if we talk in court. Shalu cries. Raja’s mum says she wanted well for families, but Viplav doesn’t want them to stay longer. Dhashrath tries to stop.

Viplav goes to Dhaani. She asked what happened. She says everything is over now. Viplav tries to answer, but Dhaani is gone in her imagination. Viplav thinks he will not let Dhaani get punished for the crime she has not committed. Ishq kaa rang safed plays………. He recalls their lovely moments. Dhaani also recalls those moments and prays to god. Sushma comes to meet Dhaani in jail. She touches her feet. Sushma shows her newspaper. Dhaani is shocked to see murder news.

Viplav gets ready for the case. Dhashrath told him that he thought him to be lamp of Khandan but he is ruining his name. He shows him newspaper. Sushma says our family name is maligned says I was about to lose shalu, and will lose viplav too. Dhashrath asks him not to fight the case.