The Reporter Times
Home Entertainment Kaabil Movie Review & Rating By Celebs: Here’s What They Said About...

In Sanjay Gupta directorial Hrithik and Yami Gautam will be seen opposite to each other. They played blind people in this revenge drama. This is the first time Hrithik Roshan and Yami Gautam have shared the screen together. The storyline of the movie is really different. Even before the release, the film already started to make headlines.

Even after their separation, Susanne Khan Hrithik’s ex-wife was also present at the screening to support him. They are often spotted together with their kid. In Kaabil, Hrithik and Yami will be seen romancing each other on the silver screen. Kabil is not a typical romantic flick but a revenge drama. And it is definitely a must watch.

It’s a competition between Shah Rukh Khan and Hrithik films this Wednesday.

Below are the reviews of Kaabil by the celebrities who attended the special screening held prior to the worldwide release.

Milap: Kaabil movie review: It is the GREATEST Revenge story EVER made in our country. The maker of #Aatish n #Kaante my Guru @_SanjayGupta delivers a MASTERPIECE! You will clap, cry, whistle, marvel at the brilliance of #Kaabil and the performance of @iHrithik He rips Ure heart out of your body! 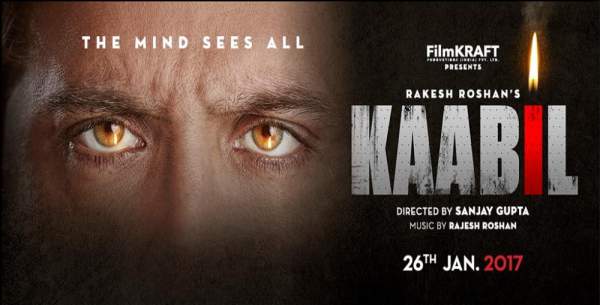 Ronit Roy: @iHrithik redefines “Performance by an Actor” in #Kaabil. Superlative and Magical! I’m so proud to be part of this motion picture!

Shabana Azmi: What a bravura performance by @iHrithik in #Kabil.He takes your breath away! Congratulations @_SanjayGupta for making such a gripping film. @RakeshRoshan_N congratulations for Kaabil. @iHrithik will sweep all the awards this year.Will watch it again for sure

Kunal Kapoor: Hey @iHrithik Hearing such AMAZING things about the film. Everyone I spoke to has gone completely nuts about it! Well done man ??? # kaabil movie review

Suniel Shetty: Hearing grrreeaat reviews for #Kaabil Sanj! So so happy for you guys…Nailed it ?

Akshaye Rathi: Hearing superb stuff about # Kaabil vs # Raees looks awesome too! Hope a Gadar-Lagaan / TZP-Welcome kind of week comes by now! We all need it!

The film is getting such a good response. Thus, it seems that Roshans don’t need to worry about clashing with Raees, SRK’s upcoming movie. It is no doubt that Shahrukh Khan is an audience magnet, but Hrithik has proved times and now that his dad, Rakesh always uses the Midas touch. This time it is a power and talent packed combination which audience will watch.

Have you watched the film? What’s your Kaabil movie review? Stay tuned to The Reporter Times for more news!!! Don’t forget sharing.