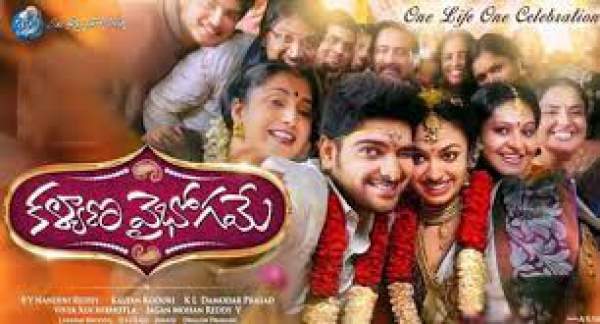 Kalyana Vaibhogame Trailer Talk: Young and handsome actor Naga Shourya is slowly making his mark in Tollywood. He made his debut with Oohalu Gusagusaladey which marked the directorial debut of Srinivas Avasarala. Rashi Khanna played the female lead in this romantic entertainer which received an exceptional response from the audience. (see: Speedunnodu trailer.)

This breezy entertainer had Srinivas Avasarala in an important role and Naga Shourya received a decent response for his performance. His second movie Dikkulu Chudaku Ramayya too was a romantic entertainer which has been directed by Thrikoti. Sai Korrapati produced both the movies which made Naga Shourya a decent actor in Tollywood.

After two decent movies, Shourya came up with Lakshmi Raave Ma Intiki in the direction of Nandyala Ravi who made his directorial debut with the film. Avika Gor played the female lead in this family entertainer and the movie entertained the family crowds. After three decent movies, he has done a mass entertainer in the direction of Yogi titled Jadoogadu. The movie ended as the biggest debacle in the career of Naga Shourya. The actor even admitted that he will not do any mass entertainers in future.

He then came up with Abbayi Tho Ammayi in the direction of Ramesh Varma. This romantic entertainer has Palak Lalwani in the female lead. The movie had a huge dose of emotions which made the film fall flat. Abbayi Tho Ammayi released all over during the New Year and the movie received a mixed response from the audience. Shourya has been careful now and needs a huge break to bring back his career on to the track.

He then teamed up with Nandini Reddy for a family entertainer and the movie has been titled as Kalyana Vaibhogame. Nandini Reddy made an impressive debut with Ala Modalaindi starring Nani and Nithya Menon in the lead roles. She then came up with Jabardasth which ended as a debacle.

After an enough gap, she is now back with her upcoming movie KV and Naga Shourya, Malavika Nair played the lead roles in this family entertainer. The title itself has been fresh and received good response from the film lovers. The movie has a huge cast lined up and the recently released audio has been receiving a stupendous response from the audience.

KL Damodar Prasad is producing KalyanaVaibhogame on Sri Ranjith Movies banner and Kalyan Koduri composed the music. Kalyana Vaibhogame will hit the screens all over on February 5th.