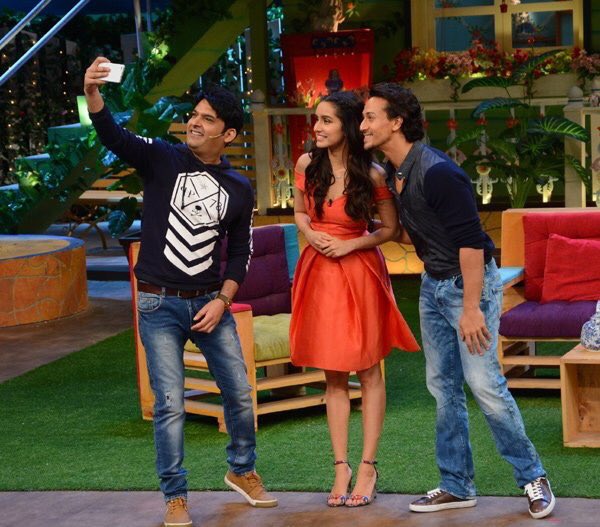 The Kapil Sharma Show 24th April 2016: TKSS reached its second episode with an encounter of Kapil Sharma with Shraddha Kapoor and Tiger Shroff on the stage. Today the superstars were on the stage for promotion of their upcoming Bollywood Movie, Baaghi. (watch: Naagin.)

Here is how you can catch the episode online on Youtube. Just play the show and share it with your friends. But here is a glitch, that video from a location outside India, do note this video will be made available in your territory 48 hours after its upload time.

The episode begins with Asgar’s entry and this time; there is no Dadi of Kapil, and only Nani is here. The doctor had operated her eyes, and she was not able to see anything. The Doctor’s name is Dr. Mashhoor and has a Goat’s kidney.

Kapil comes as a guest in his Nani’s house. He cracks a joke that Traffic is low in Bihar nowadays because people had gone to go Bihar for drinking. He tells Chandan Prabhakar aka Chai Wala that he is in search of ‘Shanti,’ Chai Wala challenges him on that.

A hot nurse comes with the Farsi Doctor and warns him that patient got his senses. The doctor informs Kapil that he had operated the customer who came to get fixed his cycle puncture in the morning. Kapil tried to flirt with the hot nurse, but she was stupid as hell.

Shumona comes on the stage as Kapil’s ex-girlfriend and flirts with him; the surprise plot is that she is the daughter of a mad doctor. She cranks some hilarious jokes with her expressions.

Then comes the Mohan Sanitary Services owner who resides in the same neighborhood and took 1 Lakh rupees for usage of his toilet. He begs Kiku Sharda aka Policeman not to close his business because it’s all that he eat from.

Tiger and Shraddha come on the stage, Kapil comes and welcomes them to the stage after promoting Baaghi. Tiger tells Kapil that he drank a lot of water and needed to go Toilet, Mohan came and took him to his house. After coming back, Mohan governs that there was no lock on the door of washroom as who is going to steal there.

Then Mohan reveals that charge for toilet use was 1 Lakh rupees, unable to pay that, Shraddha and Tiger do a commercial for his sanitary services, check the video out.

So the episode of The Kapil Sharma Show was actually hilarious. The next episode will come with a whole new guest.