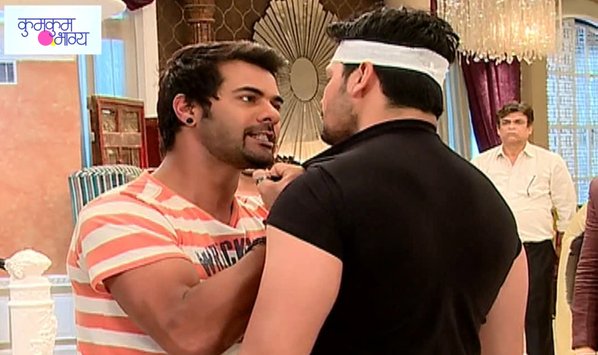 In the last episode of Kumkum Bhagya, Tanu has used really bad words for Pragya and questions her character. After that, Purab comes grabbing the criminal in the house. Purab questions his integrity of not losing his memory as he tried to run away from the house. Pragya comes near him and slaps him hard. He took his hand and himself slapped him.

Pragya reveals the truth that he is the person who tried to kill her after questioning Tanu. Pragya told that Tanu is characterless and she thinks everyone like her. Alia comes to defend Tanu and shouts on Vijay. She took Vijay in the corner and gave him warning of revealing the name of the person. Abhi stopped Alia from letting him escape the house.

Abhi questions the same with Pragya. Meanwhile, she calls the police to come to the house. Pragya told Abhi that she has the relation with her which doesn’t have any name. She also reveals that he is the professional killer who was hired to kill her.

Abhi goes angry, he went towards the killer and grab his collar. He tried to teach ethics to the person. Abhi slapped him hard and beat him up. Alia comes in between and questions Pragya. Abhi told that he trusts Pragya more than anyone else.

He questions the reason why Alia is taking the side of the killer. Pragya comes near the killer and told him to reveal the person’s name. Pragya offers him a chance that if he will name the person she will let him go.

Police come in a meantime, Inspector gives the orders to the constable to arrest the person. Pragya urges the killer to reveal the name of the person who has hired him. Vijay told that the person is from her own family.

He asks to reveal the person only in one condition if he reveals the name. Pragya agreed to this condition. He took the name of Abhi that he is the person who hired him for killing. Police took Abhi finding him the culprit of the situation.

It’s observed that Bulbul is missing from the stage of Kumkum Bhagya, but on the episode; earlier today she was present. Is their any conspiracy going on against her?

Also read : Bulbul to be murdered in Kumkum Bhagya