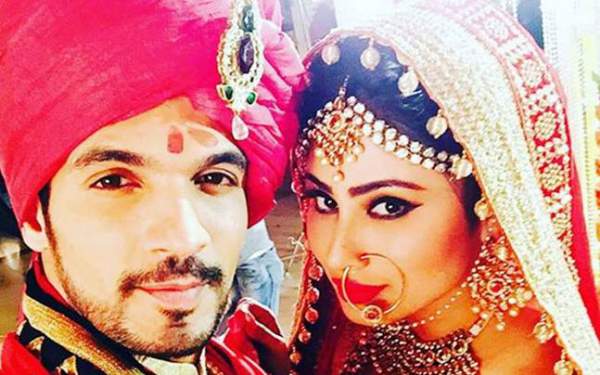 Naagin 13th March 2016: Yamini is here to teach a lesson to Ankush in this episode of Naagin for his irresponsible attitude. She slams him for being bad in fate as she lost almost everything because of him. She argued that because of Ankush they lost money and nagmani, and there is no way to get it back now. (see: Naagin 12th Mar. 2016 episode.)

Shivanya again saved Rithik from the accident. After she informs him that the crash was planned by Ankush, he slaps her hard. Yamini beats Ankush in a panic situation and even blamed him for everything. Later she asked him to give comment on her acting, Ankush surprised and kissed her feet.

Rithik shouts on Shivani for doubting his father and his intentions. She justified that Ankush doesn’t have any personal touch with him and just want to obtain the Naagmani. He scraps all the allegations and walks away. (see: Nagin all episodes.)

Gurudev instructs Shesha to follow Sangram Singh in the jungle to protect the Naagmani. Sesha follows his orders and went in the form of a Naagin and starts following the thief.

Yamini and Ankush shed crocodile tears in front of everyone just to show that they are missing Rithik. Rithik enters in the house with Shivanya; their faces remained totally stunned. Yamini walks towards him and happily asks him how did he escape such a big accident.

Yamini also asks Shivanya for the reason she goes there. Rithik informs everyone that they were on an outing, and all this happened, but with the grace of time Shivanaya saved him from dying. Yamini showed her gratefulness for saving her son and plans to go to Guru maa to find a constructive solution.

Yamini went to Guru Maa and told her about the same. She informs her that Naagin took the naagmani, Guru Maa scolds her. Guru Maa added that she found a solution of this, and now her shadow will follow her to identify the naagin anytime. A lady appears forming peacock dance.

Sangram Singh went to the haveli with Naagmani. An employee came and greeted his ruler. Sesha notices everything from the distance, trying to sort out what they were talking. Sesha keeps him following to the store room but was not able to enter in the chamber because of belpatra on the door.

Sangram prays in front of a five mouth nag. He prayed for the protection since his family is behind his life just because of this naagmani. Nag took the naagmani on his head and disappeared. Sesha found a hole to enter in the room and found nothing but a portrait of Sangram Singh, his wife and Rithik with his sister Yamini.

A celebration of Ankush Birthday begun in the house. Rithik, Ankita and Ankush was having drinks together. Ankush told them that in case Yamini will see him she is going to scold him very hard. As Yamini comes, he took a shot and escaped running from the place. She passes a smile.

Shivanya came and tried to make him understand that Ankush is just attempting to act in front of him to make him believe in the situation. Ankush was on his words and counter her that he is only telling truth. Shivanya dares him to ask for the naagmani from his family if they didn’t sell it yet.

Ankush took the new mayuri to his house introducing her as friend’s daughter in the house for temporary accommodation. On the first go, she encountered Shivanya and told her that their names are in contradiction. Mayuri wants to Rithik and tried to seduce him.

Mayuri even attempted to get in intimation with him, but he excuses and leaves the place. Shivanya comes and advises her to keep away from her husband, she declares it as a war among each other.

Yamini spotted her trying to seduce Rithik; she told her to concentrate better on the work rather doing time pass. She reminds her of the Guru Maa words that peacock is going to kill Naagin.

Stay tuned to The Reporter Times for latest TV serial Naagin news and other Entertainment updates. Don’t forget to share it on social media.