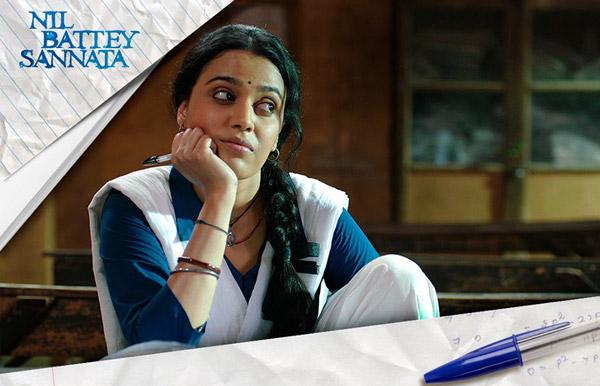 Nil Battey Sannata featuring Swara Bhaskar and Ria Shukla in the leading roles had finally made its way to theaters after facing some problems during the production.

Lead Actress Swara has received two Filmfare Award nominations mainly for being one of the most contemporary actresses of the Hindi cinema. Her career took a jump start after getting featured in supporting role for the movie Tanu Weds Mani and Raanjhanaa, in 2015 she was seen in two big films; X and Prem Ratan Dhan Payo (As Salman Khan’s sister).

Nil Battey Sannata Review: Nil Battey Sannata is a contemporary documentary based movie on the life of a mother who works as a house servant, washing dishes and clothes. The film’s storyline is straightforward and simple. It reveals a significant part of the film but not much.

The hardships faced by the Mother to give her daughter a different life, breaking the stereotypes is a big question to her. She has hopes but lacks the confidence, So that her daughter.

The first half of Nil Battey Sannata is not much impressive and seen in the alike minded movies released during the past decade. Ratna Pathak Shah works like an inspiration for her; she guides her towards the life true meaning by giving her an opportunity to study.

The second half is more emotional exposing the sad reality of the mentality among a various class of people. The movie could win series of awards for the reunion of Mother and Daughter at the end.

Nil Battey Sannata is going to be loved by the low and medium wage earning class of the metro cities who have big dreams.

Our review ‘Nil Battey Sannata is a great movie with an enthusiastic storyline which touches predilections of the audience. Perfect Family Entertainer of the week, could make light hearted people cry during the second half’