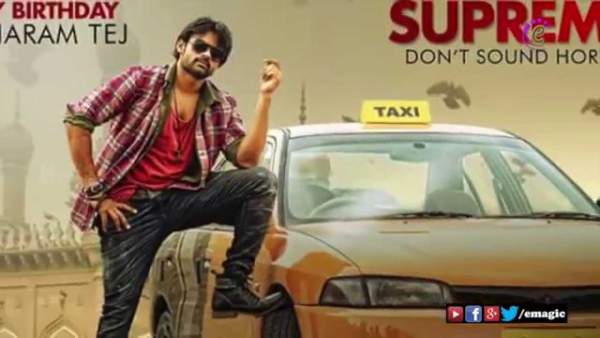 Story (Storyline or Plot):
Sai has portrayed the character role of an aggressive taxi driver Balu, who stumble upon a boy (played by Mikhail Gandhi) and takes care of him along with his father (Rajendra Prasad). The main story begins when someone kidnaped and took the boy to Orrisa.

Balu decides to go and bring back the little one. With the course of time, he gets to know that it is the work done by a gang which is operated by Kabir Singh and Ravi Kishan. The further story develops when he fights against all odds to save the boy and his girlfriend (Rashi).

Plus Points:
The comedy is its savior, and all the credit goes to Anil Ravipudi for including it at regular intervals. The first half of the movie is entertaining, and everyone would like it.

Sai Tej appears to be fine with his acting and shows a sudden increment in his performance and dance. The part played by the young boy is excellent as he let other characters take center stage, but he looks confident in whatever he does on screen.

Raashi Khanna has very well played the role of Bellam Sridevi. It is an exciting role which makes everyone laugh all because of her funny antics and looks. Vennela Kishore has very well played her role. The main song for the film has been the comedy song which features Pruthvi and Prabhas Seenu.

Ravi Kishan has done justice to his character of comedy villain. Moreover, his and Shaking Seshu’s chemistry is likable. Rajendra Prasad and Sai Kumar are good with their supporting roles. Mikhail Gandhi has superbly portrayed the character of the young boy. He has been wonderful.

Minus Points:
The disappointment starts with the plot/storyline. After a brief start, you can predict what’s going to happen next. So, it’s the first let down for the film. The second half of the flick is just concerned about a single topic, and thus, we aren’t able to see much of exciting moments.

There comes one devotional song which is good, but could have been better to make the talkie more liveable. You can watch that at the point of time, the logic doesn’t work. It includes the way Sai goes in search of the boy, and the heroic ways of him look silly.

Technical Aspects:
The choice of the locales is good as beautiful venues, and locations have been chosen. The cinematography is superb, especially during the Andam Hindolam song. The screenplay is excellent as it doesn’t drag the film. Sai Karthik has composed the music very well.

The directorial venture of young director Anil Ravipudi has picked the right pulse of the viewers. Though the story is ordinary, but the way of representations is good which adds entertainment to it. So, it does fare the film well.

Verdict:
The film will surely add to the stardom of Sai Dharam Tej. The valuable assets to the flick have been its entertaining comedy timing and emotions. If the predictable story is kept aside, then it will surely entertain you.

So, are you going to watch it? Or if you have watched the movie, what’s your Supreme review? Do share with us and participate in the discussion below. See what others have shared in comments.