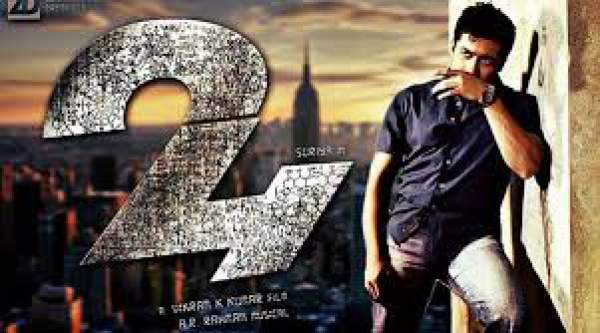 24 Teaser and Movie Release Date Out: Talented actor Suriya has been busy with multiple projects in his career and he achieved stardom after he scored many back to back hits in Tollywood and Kollywood. He excelled as an actor in both the languages and his performance in those films received wide applause from the audience. (see: Pakistan vs Bangladesh live streaming.)

Suriya’s career graph was never stable as he scored many failures but his performance in those movies received wide applause from the audience. All his recent outings ended up as debacles and he recently wrapped up the shoot of his next movie which has been titled 24. (see: Suriya’s Singam 3 release date.)

The flick is said to be a scientific thriller and Suriya accepted the movie on first go. Talented director Vikram Kumar who is basically from Tamil Nadu scored two back to back hits in Telugu with Ishq and Manam. Vikram first narrated the script to Telugu Superstar Mahesh Babu who was not completely convinced with the script of the film.

He then met Suriya in Chennai and narrated the plot which impressed him. Vikram Kumar took his time to wrap up the pre-production work and Suriya will be seen in two completely different roles in the talkie.

The recently released first look posters created enough sensation all over and Samantha, Nithya Menon are the heroines in 24. The movie has enough weight for visual effects and so the makers have taken enough time after the completion of the shoot to wrap up the post-production work.

Suriya completed his part for the movie and he moved to his next project Singam 3. The makers are currently busy wrapping the post-production work and AR Rahman composed the music. The audio of 24 will be launched in two different grand events in Chennai and Hyderabad for Tamil and Telugu versions separately.

The first look teaser of the film will be revealed on March 4th at 6:00 PM. Suriya produced 24 on 2D Entertainments banner and the movie has been slated for a massive release all over on April 16th in Telugu and Tamil languages. Suriya pinned many hopes on the flick and he is in plans to bounce back to success league with 24.