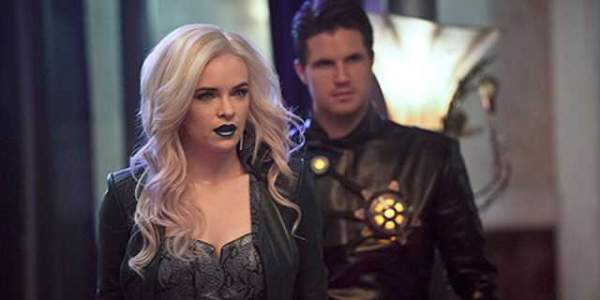 Going back to Earth-1 this week was as much fun as going to Earth-2. Titled “Escape from Earth-2” and directed by JJ Makaro, this week’s episode was quite an episode with doppelgangers from Earth-2 taking the center stage. We got our first experience of Barry from Earth-2. Apart from a few “being too sensitive” moments, he was much similar to the Barry we knew before he was struck by the lightning that made him the Flash. Many of the Earth-2 doppelgangers died in the last episode, so we had to make do with the ones who were left as no new ones were introduced.

The story continues from the point where Zoom has captured Barry from Earth-1 and is scouring Central City of Earth-2 after coming to know that Dr. Wells is also present on Earth-2. He is wreaking havoc on Earth-2 and spreads around the word for capture of Dr. Wells. The moment where he is sitting on the top of the building with a message written with fire on the front of a building was especially quite cool. So, in order to capture Dr. Wells, he attacks STAR Labs where he effortlessly works off the security. Dr. Wells and Cisco try to run away along with Earth-2 Barry. Guess what! Even Dr. Wells from Earth-2 has a time vault like the one Eobard Thawne had for himself on Earth-1.

They are able to fool Zoom once and run for their lives. They are forced to disclose everything to Barry from Earth-2 and ultimately, to Earth-2 Iris. Earth-2 Barry gets quite “pouty” after getting to know that Earth-1 Barry was spending time with Iris all this time. But, he is handy too. He helps Cisco in locating Killer frost. All of them go inside the woods looking for her, where she attacks them. After a fight, she agrees to help them find Zoom’s lair on being cited that Zoom killed the love of her life, Ronnie.

She takes them to the location where Zoom keeps all his prisoners. Meanwhile, Barry gets talking with Jesse and tells her that her father is much better than she thought. Also, they decipher Jay Garrick’s name in messages by the third prisoner who taps the message to let them know. I am suspecting more and more that Jay Garrick may be Zoom.

I am leaving the climax untouched for you to watch.

‘The Flash’ Season 4: Release Date and Everything So Far