Cara Delevingne – The newest superhero behind Megan Thee Stallion’s newest Black Attire at the Billboard Awards, was spotted looking out for Megan from sideways.

Delevingne was watching from the back when Megan tried a few times to get the right look on the red carpet. After looking for a few moments, Cara decided to help her friend out.

Megan’s undercover agent was not happy with her friend being the trouble. As Cara had a bad time watching her friend alone, she decided to step in and shock the world.

After watching Megan struggle for a few moments in an unprecedented move, Delevingne stepped in. She looked right at the camera while she helped Stallion to get the best look.

Megan The Stallion won the Top Rap Female Artist award, defeating the other nominations of Cardi B and Latto.

Cara Delevingne looked confident and carried a smile while helping Megan out.

The Result – here is what Megan’s feature at Billboard Music Awards looked like after Delevingne’s intervention.

Cara didn’t stop looking out for Megan even at the award ceremony, not just on the red carpet. When reporters were clicking Megan’s expressions in the front row, Cara sat next to her. 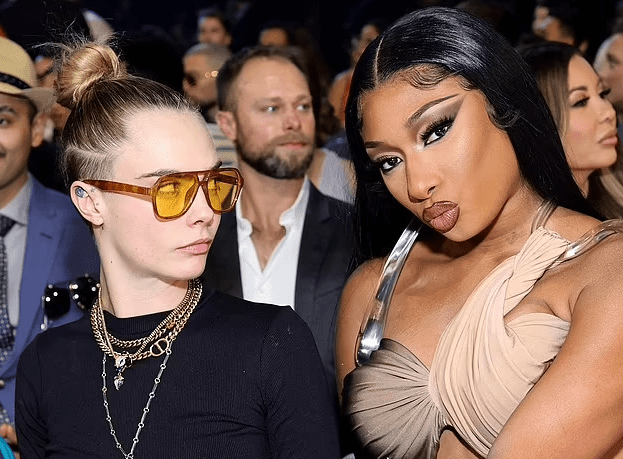 Billboard Music Awards finalists and winners are founded on key fan interactions on stores and social media with music, including album and digital song sales on Spotify/ Apple Music, streaming on YouTube, radio airplay, and touring.

Since 1940, the Billboard Awards have been the go-to guide for rating the popularity of content creators, artists, songs, and albums and are the greatest measure of success in music in various categories.

The BBMAs broadcasts live coast-to-coast from the MGM Grand Garden Arena in Las Vegas on Sunday, May 15 at 8 p.m. ET / 5 p.m. PT on NBC and streams live on Peacock.