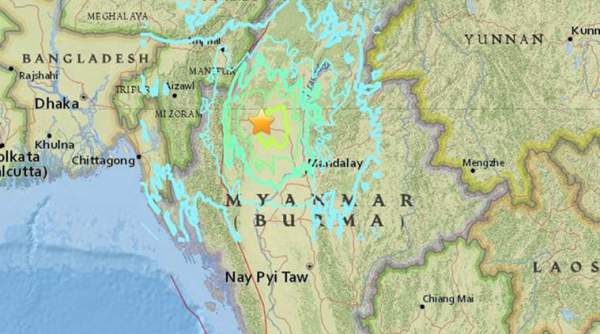 Earthquake in Myanmar: The immediately connected regions of India and Bangladesh to Myanmar also felt the tremors of the strong quake which hit in Burma today 13/4/2016. No immediate report of casualties came. (watch: KKR vs MI.)

The earthquake was measured about 6.9 on the Richter scale, and the epicenter was found out to be at a depth of 135 km north of Myanmar capital Naypyidaw as per the reports of the US Geological Survey.

The people living in the Yangon city panicked as the quake hit them. Authorities haven’t reported any damage yet. The tremors originating from this earthquake were felt in Kolkata, Guwahati, Patna, Bhubaneswar, and Delhi.

# 7 hospitalized due to trauma, other two admitted to RIMS in Imphal (Manipur) after injuries.

# 7 hospitalized due to trauma, other two admitted to RIMS in Imphal (Manipur) after injuries.

8:50 pm IST – A Police outpost building in Imphal (Manipur) collapses after tremors were felt in the city: ANI

# No casualties reported in Sikkim, Siliguri, and Kolkata: NDRF.

# Nothing reported yet, waiting for reports from border area: Mizoram Police.

# Population estimate in the radius of epicenter.

8 pm IST – GDACS said that it would have a high impact on human as per the magnitude.