Happy Purim 2019 Dates, What is Purim, History, And Costumes, Traditions Of The Festive Jewish Celebration: Purim is a Jewish spring holiday based on the story of the ancient Persian Empire. ‘Purim’ itself is a Persian word which means ‘lots.’ It is used as a reference to remember the date decided for the Jews’ annihilation was done by casting lots. (check: Holi messages.)

The holiday is observed every year on 14th of Adar in the Jewish calendar. However, the date varies as per the Gregorian calendar. This year, it falls on March 20 to March 21, 2019. This day has a prominent place in the Jews culture and celebrates the salvation of the Jews from the wicked Haman, through the leadership of Queen Esther and her cousin Mordecai.

The customs and traditions of this Jewish celebration aka Purim holiday include public readings of the Book of Esther (k’riat megillah), offering charity to the poor (matanot la’evyonim) and exchanging gifts with friends (mishloach manot). The global celebration is to remember the defeat of Haman, the advisor to the Persian king, who plotted to kill the Jewish people around 2500 years ago.(share: Holi pics.)

The queen took a stand for her people and saved them from the massacre. Moreover, Purim also has a costume tradition. The festival has one component which is a boisterous feast (se’udah). During this time, they dress in costumes and drink to the maximum of their capacity. They are asked to reveal until they can’t differentiate Mordecai from Hama.

The Book of Esther characterizes Mordecai and Haman as good and evil respectively. The book tells the story of all these characters. Haman used to be the right hand of the Persian king. He felt insulted when Mordecai didn’t bow to him. Haman found out that Mordecai was a Jewish. So, he decided to kill all the Jews, and the king approved it. After that, Mordecai declared a time to mourn and penitence for Jews.

In the meantime, Esther, the wife of the King and niece of Mordecai planned to fast with all the Jews for three days. (Actually, this is the honorable story. That is why the Fast of Esther come into play and is done on the holiday eve). Moreover, the King didn’t know that Esther was a Jewish and Mordecai prevented an attempt on his life.

After the fast had got over, Esther planned a succession of feasts in which she invited both the Haman and the king. Then, she revealed her religion and Haman wanted to annihilate all the Jews. After that, the king decided to hang Haman instead. Then, Mordecai took Haman’s place. 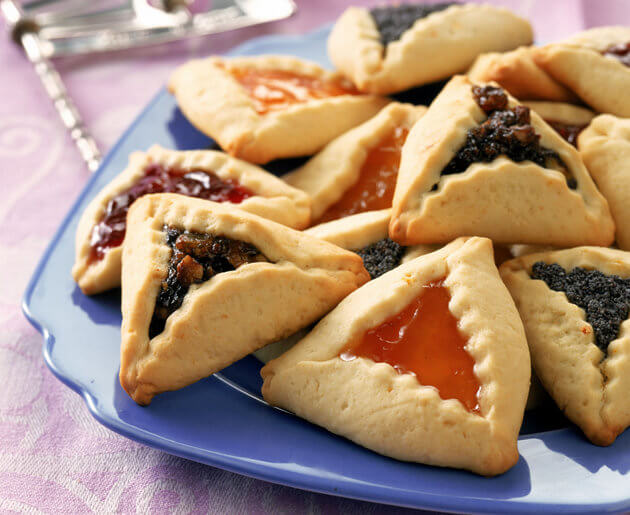 How is Purim Celebrated?

The celebration is not quiet instead it is loud, chaotic, and colorful with dancing, feasting, disguises, and the immoderate consumption of alcohol. Children like this festival a lot, like adults, as they get to dress up fancy to portray the characters they want.

There are four main celebrations – known as mitzvot – that Jews are supposed to do. These are:

Whenever the name of Haman is recited, festive noisemakers (called groggers) drowns it using every possible noise like shouting, stamping, booing to press the name down in the sound. On the other hand, Jews cheer the name of Mordecai.

However, by the end of the night, the difference between Haman and Mordecai vanishes.

People send/share Mishloach manot which are treats and goodies with their friends and family on this day. Jews organize a jovial feast (Seudat Purim) in the evening. Drinking is mandatory in this fest to the level that people can’t tell the difference between the phrases Arur Haman (cursed is Haman) and Baruch Mordechai (blessed in Mordecai).

Oznei Haman (Hamentaschen which means ears of Haman), a triangular cookie filled with the different flavor of jam, is a traditional food for the occasion. Another customary food is kreplach (small dumplings usually filled with meat, mashed potatoes, etc.). Other dishes include made with beans which Esther ate to avoid eating non-kosher foods.

What is the proper greeting/How to wish Purim?

You can wish Purim in Hebrew as Chag Purim Sameach, Freilichin Purim (in Yiddish) or “Purim Allegre” (in Ladino). The Hebrew greeting loosely translates to “Happy Purim Holiday” and the Yiddish and Ladino translate to “Happy Purim”.

People during the book reading wear masks to accept the goodness, holiness, and that God is often hidden. It is the only book which doesn’t mention the name of God.