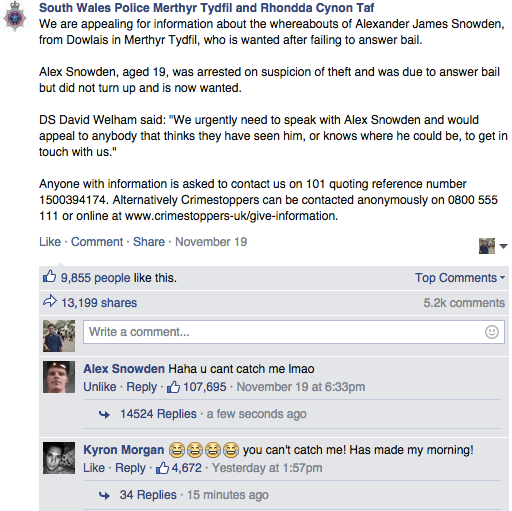 South Wales Police Merthyr Tydfil and Rhondda Cynon Taf posted a photo on facebook seeking information about a suspect for theft. The post was against a person named Alex Snowden. As a reply, Alex Snowden replied them in a fun manner. The only answer Alex gave to the post of 100 words was ‘Haha u cant catch me lmao’

His comment got more than 100,000 likes since Nov 19, which is actually 10 times of the likes on the original post by the said police’s page on facebook. Sorry to say, but police is actually trolled in the comments on his reply and the post on facebook.

We are appealing for information about the whereabouts of Alexander James Snowden, from Dowlais in Merthyr Tydfil, who is wanted after failing to answer bail.

Alex Snowden, aged 19, was arrested on suspicion of theft and was due to answer bail but did not turn up and is now wanted.

DS David Welham said: “We urgently need to speak with Alex Snowden and would appeal to anybody that thinks they have seen him, or knows where he could be, to get in touch with us.”

Anyone with information is asked to contact us on 101 quoting reference number 1500394174. Alternatively Crimestoppers can be contacted anonymously on 0800 555 111 or online at www.crimestoppers-uk/give-information.

We do not endorse any action in relation of breaking of law and just covering the facts based on the assumption that the post on facebook and the comment are on actual basis.