Irish mixed martial arts sensation and the biggest name in UFC, Conor McGregor, returns to the octagon this summer to complete the trilogy with rival Dustin Poirier. With the head-to-head scores finely balanced at 1-1, this is a winner takes all bout.

The pair renew rivalries at the T-Mobile Arena in Las Vegas on July 10 2021, and will play out before a bumper audience. This is a fight that deserves a live audience, and sports fans are delighted spectators are being allowed to attend. UFC 264 has McGregor vs Poirier as the main event, supported by a clash that is equally exciting in Gilbert Burns and Stephen Thompson. That’s sure to be a pulsating clash and could end up overshadowing the main event in terms of quality. But there’s only one show in town in terms of hype and drama.

Notorious off to a winning start

Two-weight world champion McGregor is currently ranked number five in the UFC rankings following a period of inactivity. The Dublin scrapper has dropped down the pecking order over the last few years after announcing his retirement, moving to professional boxing, only to return to UFC and lose to Poirier in the rematch.

Conor first met Dustin in September 2014 in Las Vegas on UFC 178. McGregor won that bout in the first round by knockout and picked up the performance of the night. Notorious took out his opponent in devastating fashion, ending things with 1.46 on the clock after battering his opponent into submission with a flurry of punches.

That result was part of a winning run for McGregor, one that began in the winter of 2011 and took Conor to the very top of the game. His winning streak finally ended in March 2016 when stopped in round two by Nate Diaz on UFC 196. That was the welterweight debut for McGregor but didn’t go to plan, the Vegas bout winning the fight of the night. Nate choked out McGregor by a rear-naked choke.

Since that loss to Diaz, Conor hasn’t been the same. He has been unable to find the consistency and winning form of the early part of his career. After losing to Diaz on UFC 196, McGregor has lost two of his last five. He was beaten inside the distance by Khabib Nurmagomedov and knocked out by Poirier in a revenge mission. His career record now stands at 22 wins from 27 fights, 19 by KO, two on points and a submission. Of his defeats, McGregor has lost four by submission and one by KO. He recently dropped out of the sport’s pound-for-pound rankings 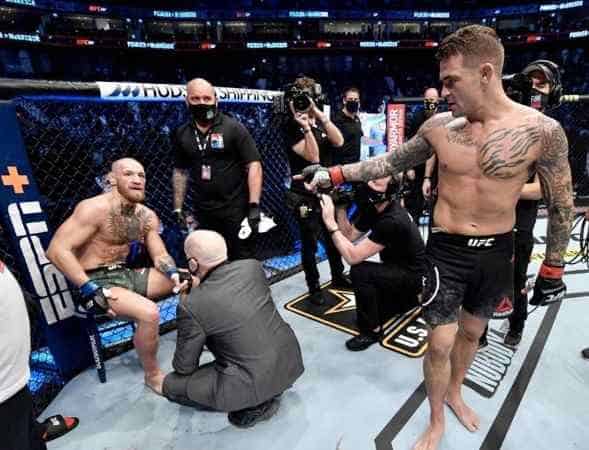 “Mcgregor vs Poirier” by Jeff Bottari/Zuffa LLC is licensed under CC BY 3.0

Diamond out to do the double

American Dustin Poirier heads into this fight, looking to do the double. He was severely beaten by McGregor the first time but repaid the favour. He enters the trilogy with confidence in the camp. He had the beating of Conor, has been much the more active of the two men recently and continues to improve.

Was he taken out by a better fighter the first time? Did he beat a sorry version of McGregor in the second fight? Or has he progressed far beyond the Irishman? We’ll find out on fight night.

The Diamond brings a professional MMA record of 34 fights with 27 wins. Of his victories, Dustin has bagged 13 by knockout, seven submissions and seven by decision. His defeats are made up of two knockouts, two submissions and two points.

His last defeat came against Khabib in September 2019, but there’s no shame in that result, given the skills of his opponent on UFC 242 in Abu Dhabi. The loss to Khabib remains his only defeat in nine, a run stretching back to a 2016 KO at the hands of Michael Johnson in Texas.

The scene is set

The scene is set for this third and, probably, final fight between the rivals. There’s no doubt McGregor wasn’t at his best last time, and we should see a better version of him here. Somewhere close to his best? The training footage and physical shape of Notorious suggest that will be the case but there’s no doubt his A-Game is needed. He must improve ten-fold on what we saw from him last time but it’s unlikely a similar performance to the one that seen him defeat Poirier the first time wouldn’t cut it. It has been a long time since we have seen Conor firing on all cylinders. Does he still have it in him.

As the old saying in the fight game goes, it’s hard to get out of bed and train when you’re wearing silk pyjamas. Has the fame, fortune and recognition stolen the edge McGregor once had? Is his aggression a thing of the past? There’s only one way to find out.