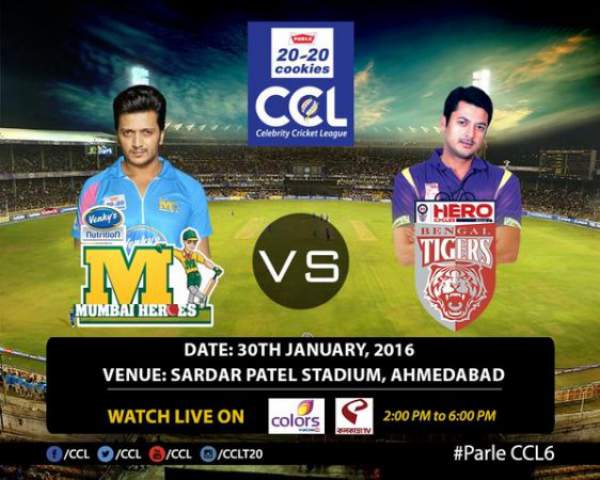 Mumbai Heroes vs Bengal Tigers Live Streaming Info: CCL 2016 Live Score; Cricket Match Preview – 30th January: It is the match number 9 of the tournament being played. The Celebrity Cricket League season 6 is in progress this year. In the present game, Mumbai Heroes will lock horns with Bengal Tigers. This is the second match of both the teams. It will be played today, i.e., 30th January 2016 at Sardar Vallabhbhai Patel Stadium located in Ahmedabad. (see: Punjab vs Bhojpuri.)

MH defeated PDS in the inaugural match of this season. It appeared to be one-sided game. The batting lineup proved to be a big support and its batsmen Ahluwalia, Deshmukh, Kocchar and Bherwani helped the team to score a big total.

Bowlers complimented the innings of batsmen. The likes of Bobby Deol and Sadanand restricted the opposition’s batsmen from scoring runs. They took four wickets early in the game. As a result of team effort, Heroes won by 97 runs. While, BT lost its earlier game against Bhojpuri Dabanggs without much efforts by 68 runs. (see: Telugu Warriors vs Chennai Rhinos.)

Thus, in this match, the Tigers will put all their efforts to score a win. They will be looking forward to their first win while Mumbai team will be high on confidence and surely be looking forward to scoring another win. If they succeeded in winning it, they will move one step closer to the semi-final stage. By looking at both the sides, it will be a crucial match for them.

It is scheduled to start at 2 pm. The viewers can catch the live updates on Colors TV and Kolkata TV while the live streaming will be on YouTube and starsports.com.