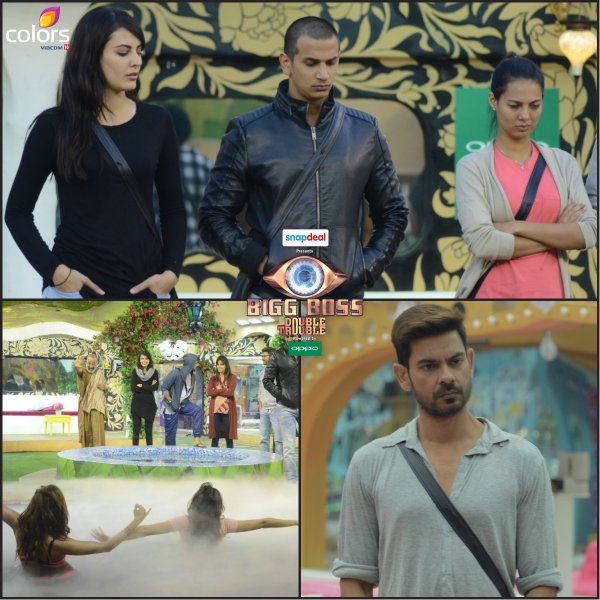 ‘Bigg Boss 9’ 8th December Full Episode updates and Wildcards entry | Day 57 Colors TV: In the today’s episode of the big boss, Priya accused Rishab of breaking the rules and titled him for a punishment by taking the protein back. The two rules which were broken by him was to speak in English and using headphone from the wrong side. On which she took his personal items.

Kishwar got scared of seeing a ghost simulating image in the bathroom. On which he decided to take Mandana’s help, but rather than helping, Mandana also makes fun of him. Rochelle who was also there got scared of Kishwar scare talks and run away from there. Everyone dances on ‘Daru Pila’ song thereafter.

Priya comes in the bedroom like a devil for Price and asked for his mattress while he was sleeping. Keith demanded a single chance for him since he have broken the rule for the first time. On being denied by Priya, Prince blames that it’s only her frustration because he has exposed her. Kishwar also blames her for acting with overstrictness. Priya leaves the room claiming that its her personal desire.

While everyone other was blaming her for her deeds, Rochelle comes and argues with her over the issue of her personality to do things in a wrong way in order to get the camera’s attention.

Later while sitting with Mandana and Rishab, Priya justifies her actions as an order of Bigg boss otherwise she would be the one who is going to get penalized. She shares her feelings and shows her intend the to be the manager.

Prince claimed the changing behavior is the result of getting the privilege to be a captain for the second time. Priya did the mistake of speaking in English on which Prince took the revenge by putting her bag in the storeroom. Rishab offers his protein shake to Prince. Meanwhile, Kishwer blames Priya for discrimination to Rishab and Prince by taking only t-shirt of Rishab.

Priya took the inner of Rishab next time when he fall asleep. On being protected by him, she replaces the inner with his protein shake. Rishab blames and says that now only his bag is remaining and she should take that too.

Paranormal activities are being observed in the house once again.

Bigg Boss – Who nominated whom?

Bigg boss finalises the names of Rishab, Mandana and Kanwal for the nominations. Bigg boss also gives special power to nominate one inmate directly to Priya. Priya nominate Keith instead of Price. Keith justifies his innocence all laughed on this.

Rishab appreciated Priya’s decision of nominating Keith, Priya justifies her nomination as a medium to make her more strong for the upcoming time. Since in case if she has nominated Price it would be of no use.

Priya also sees the ghost reflections in the mirror while washing the dishes. Kishwar and other inmates also have seen the same of which they go shocked of some unidentified object’s presence in the house. Kishwar asked to accompany her everywhere to Suyyash. Rishab claims that it’s a fake thing and nothing serious.

Wildcards Nora Fatehi and Gizele enters in the house and has a dance in the swimming pool which was enjoyed by everyone.Wildcards have a meeting with the inmates of the Bigg Boss Season 8.

On being asked by Priya about her performance, Gizele replied positively and claimed that it was going good outside and she is just rocking the show. Gizele termed her as ‘Wild’ of BB9.