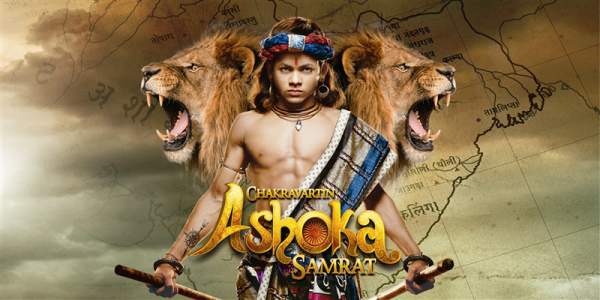 Chakravartin Ashoka Samrat 1st April 2016: Nicator came to hug Helena in jail. She said that she knew he would come to save her. He said Bindu made a big mistake by keeping her alive and now he would take revenge from Maurya and thought Helena would make them servant and said couldn’t do even getting many chances and it was shameful that her daughter was like that. (check: CAS All Episodes.)

Sushim was not sure if those preparations were for holi. Mahamatya said that he would alert his spies. Sushim said that he want to do that as he got a chance to prove himself before father. Siamak heared it.

Nicator’s soldiers walked inside and said that he knows to make impossible possible. Bindu got angry. Nictaor calmed himself that he only came to play holi and not intended to interfare in family matters. Nicator said that he came fully prepared this time.

Ashoka wanted to go to Tashak’s palace but everyone insisted to accompany him. Kaurvaki also came dress similar as Ashoka.

Ashoka told her against it. She reasoned that it was for motherland and would have allowed her to come and she inspected place around river. There were some points in dark and they could enter from backdoor. She would misguide the crocodiles and he could enter. Maharaj Jagannath looked proudly at her.

Sushim intentionally dropped something and send the soldiers. He covered himself with shawl and left. Siamak followed.

Kaurvaki threw stones in the river and waited for crocodile’s reaction. They finally swam.  All followed the plan. They kept stabbing crocodiles. There were some soldiers on trees who kept shooting arrows. Kaurvaki lost balance and felt in river. Ashoka jumped to save her. Kaurvaki stabbed a crocodile even when she was in water. Ashoka helped her.

Tashak told her servants not to drink alcohol on holi night. It was same night when Maurya attacked us and had to be alert. Ashoka and his team reached backdoor of Tashak’s palace. Ashoka tapped the door. Soldiers were instrigued and were beaten. They entered inside.

Sushim kept checking if he was being followed. He began to run to divert if someone followed. He came to Nicator’s camp.There were so many soldiers. Simak too came to check where Sushim went.

One of the soldiers gained conscious and ran to alert everyone. Sushim changed Nikator’s soldier’s attire. Soldiers surrounded Ashoka and his people.

Nicator told the plan to army. Holika Dehan’s prepration were going on in the palace. He told his commander about weak point of palace and told them to first catch the queens and then kids amd then Bindu. Sushim was also standing there. Siamak hit him on his head from behind and he fell unconscious. Nicktor demanded to know how he reached.