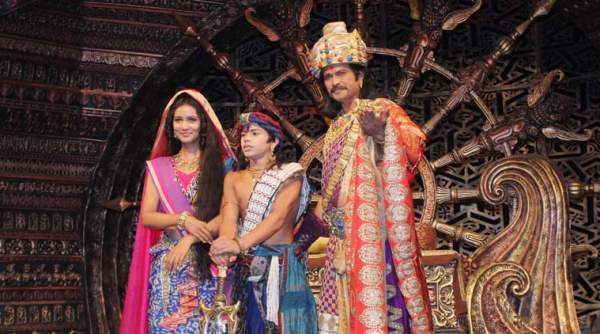 Chakravartin Ashoka Samrat 4th March 2016: Today’s episode (number 288) started with a scene in which Ashok was thinking while standing in the balcony. He was trying to figure out if he had something wrong or inappropriate. Kaurvaki arrived and he shared his thoughts with her. Then, she replied that he hasn’t done anything wrong. (read: Guntur Talkies review.)

In another scene, Sushim was featured lying in bed unconsiously while Charumitra worrying for him sitting beside him. She said that there hasn’t been any peace in the palace since the arrival of Ashoka and Dharma.

In the next scene, Drupad appeared guiding servants for the preparation of Ashoka’s bath. Subrasi was witnessing it too. Ashok came with his mother, Dharma. Then, her mother made him to sit on a stool. After that, she did ’tilak’ stopped and smiled. Without resisting, he asked her the reason for stopping and smiling.

To it, Subrasi said that he wouldn’t understand what a mother feels so let her enjoy each and every moment of such a wonderful day. Then, Dharma and Subrasi applied turmeric (haldi) ‘lep’ on him. Drupad smiled seeing Ashok being treated like a baby. Some haldi slipped and went into Ashoka’s eye which started hurting him. It started burning and he asked for cold water. Hearing it, Drupad realized that he hasn’t arranged cold water and arranged only hot water. Drupad, Subrasi, and Dharma went to take some of it.

After a while, Ashoka screamed because of the burn. While passing by, Kaurvaki heard Ashok screaming. She too smiled seeing him in that condition. She entered the room and Ashoka mistakenly called Kaurvaki ‘maa’ and asked her to pour some water on him. She saw some milk and started pouring on him while smiling. In the meantime, all three – Dharma, Drupad, and Subrasi returned and smiled seeing Kaurvaki and Ashok there.

Seeing both of them together, Drupad was about to say something but Dharma stopped him. However, Kaurvaki realized their presence and in the hurry, the milk vessel fell off her hands. Since his eyes had cleaned up by this time so, he jumped and saw her in amaze. He asked her for her presence. To it, she replied that ‘nothing’ and further said that her father is calling her and she should move. To enjoy, Subrasi asked her to stop as Ashoka hadn’t bath till that time. Shying Kaurvaki moved from there.

In the next scene, Dharma was preparing his son for his coronation for the post of Yuvraj. Then, he appeared to be going towards ‘sabha’. In the background, drums were being beaten. Hearing the sounds of drums and music being played, Sushim screamed and asked Charumitra to stop it.

Ashoka arrived in the ‘sabha’. He was ’tilak’ed by the brahmins present there and asked the king to come. Bindusar came and slapped Ashoka. Then, he explained him the reason for slapping. He said that he slapped him as a lesson that he would remember that he is an ordinary kid who always has to keep his goal in his mind and fulfill his duty. Further, he stated that whatever decision he will make in the future, he will have to make it very carefully.

After that, Bindusaar put the crown on Ashoka’s head. Meanwhile, Helena and Siamak fumed in the background while Radhagupt looked on him proudly. Rest of the audience chanted for him. Then, Ashoka sat on the throne.

Precap: While going through the corridor, Ashoka was stopped by Sushim who badmouth him and his mother and threw vases at him. Then, both of them had a fight. Ashoka looks down the balcony. Charumitra went to Bindusar and complaint.