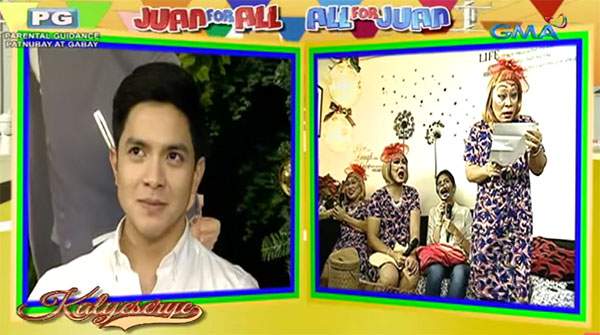 AlDub December 10: One more episode is aired today from the one of the most television shows across the globe featuring Alden Richards and Yaya Dub played by Maine Mendoza. Today, it marked the 20th weeksary of the show. It is trending with the hashtag #ALDUB20thWeeksary. (see: SRK Hafeez Saeed Ki Begam.)

Eat Bulaga is the longest running noon-time show in the Philippines produced by TAPE and airs on GMA Network. It is setting up new milestones day by day and become very famours worldwide.

If anyone wants to get the idea of its popularity, then it can be get by looking at its number of tweets which broke the earlier records of highest tweeted tweet.

On Tuesday’s episode, Yaya Dub and Lola found out the encrypted message written on the ring. It read the following – “Forever, Bawal Ibenta At Isangla.”

As the day approached to its end, Alden Richards passed a secret message to Lola Nidora which was followed by a mysterious letter from an unknown source.

Stay tuned to this page by bookmarking it to catch the video recap of today’s episode of the top rated daily show of Eat Bulaga – KalyeSerye which features the love team of AlDub. The video will be updated here at the earliest.