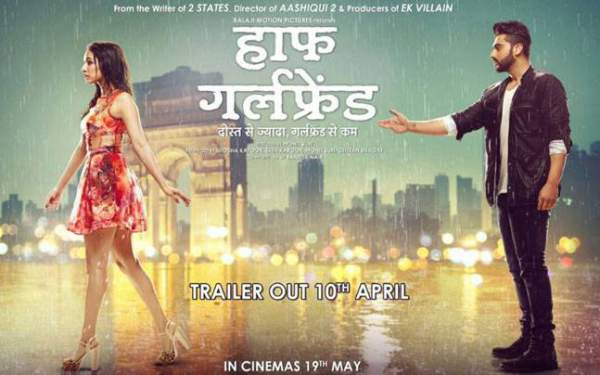 Half Girlfriend Trailer: The movie official trailer for Half Girlfriend, the upcoming Bollywood film of Arjun Kapoor and Shraddha Kapoor has been released on Monday morning. Directed by Mohit Suri, the flick has been adapted from the novel of Chetan Bhagat with the same name. It tends to explore the relationship status of the modern day youth.

Arjun and Shraddha have toge ther for the first time to share the space on the big screen. The 2-minute-42-seconds trailer is an overview of Madhav Jha, a Bihari boy and Riya Somani, a Delhi girl’s bittersweet love story. Arjun is portraying Madhav and promises an outstanding performance. On the other hand, Shraddha is playing Riya who appears to be focused on her dreams. Their love story starts with basketball, the common string.

The movie has the tagline “Dost Se Zyada, Girlfriend Se Kum” and it seems to be the perfect description for the film.  The trailer was released on the official YouTube channel of BalajiMotionPictures and it shows the acting skills of Arjun while Shraddha is kept wrapped up. It may be the suspense of the character. Arjun is impressive but his Bihari accent is not working out.

The music in the trailer is its unique selling point. Mohit Suri can be trusted when it comes to music. After the release, the film may bring a new relationship status “HalfGirlfriend” It has written and produced by Chetan Bhagat.