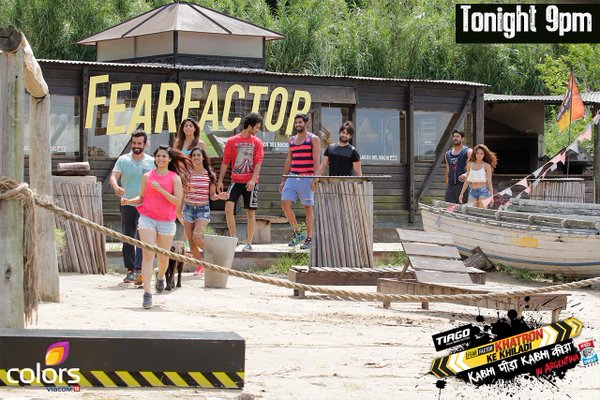 Khatron Ke Khiladi 20th March 2016 Episode: The number of contestants is going less with each successive day in KKK 7. In the recent episode, we have seen an elimination of Mahhi Vij, who was in the red radar of Arjun Kapoor from the last episode. (check: HT Awards 2016 winners.)

Just with a second’s gap, Mukti Mohan lost to Tanisha Mukherjee while unfastening herself from the box tied to a fluctuating chopper. Jai Bhanushali performed the task but, unfortunately, got injured while performing the stunt. Although he have completed the feat and wounded while jumping from the booth.

Vivian and Sidharth had played out the most dangerous stunt of all times. They have to take the car down a truck which was moving at a far-reaching speed. Non ended by this, more impressive feature goes in the same task when they have to unhook the five yellow flags on the sides of the truck.

Vivian Dsena beat Siddharth Shukla in a high-speed truck stunt by 4 seconds. Other contestants including Vivan Bhatena, Sana Khan, Raghav were on a speeding boat and had to hold themselves on it.

All the participants were healthy in this stunt, but Vivian just won the game with a gap of just one second performing the task in 38 seconds from Raghav. Sana Khan was in the safe zone.

Although the competition was tough Mahhi Vij being one of the most likely nominees, have somehow lost the hope of winning the show. She left the hopes after car stunt, which was a game changer. The next episodes of KKK7 would be most awaited.

Let us know in comments whether you are happy with the nomination of Mahhi Vij in KKK 7 or not.

Stay tuned for latest KKK7 news and other Entertainment world updates. Don’t forget to share it on social media sites with your friends as they may love to know about all these.

So, keep visiting and sharing. Also feel free to share your views and thoughts with us. Check out below what others have shared.