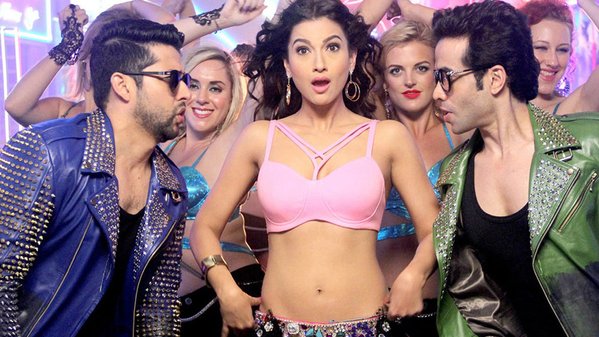 Many top producers and leading production houses have been busy producing adult comedies and some of them made gold at the boxoffice while others have been rejected badly.

KKHH3 is said to be the country’s first p*rn comedy, the makers mean to reveal that the comedy comes from po*n and don’t expect any such episodes in the film.

The movie created enough buzz after the release of the first look poster. Tushar Kapoor, Vir Das, and Mandana Karimi played the lead roles in the film which has been directed by Umesh Ghadge. Milap Zaveri penned the script of the film along with Mushtaq Sheikh. The movie has been shot completely in Goa and Bangkok.

The theatrical trailer of the film has been high on intimate and p*rn comedy which caught the attention of the movie lovers of this genre. Though the film faced some problems from a section, they have resolved the issues soon. KKHH 3 has been stalled at the censor board and the movie has been kept on hold for over 6 months.

KKHH3 cleared the censor finally and the movie received 150 cuts from the censor board members and has been awarded A certificate.

This has depressed the filmmakers but with nothing  much to do, the makers headed with a comfortable release date and KKHH 3 released all over on January 22nd and clashed with Akshay Kumar’s Airlift. The movie received a mixed response from the audience all over and the movie has been rejected by the critics slamming the content of the film and the entertainment all over.

Though the film opened with Rs 8.15 crores on its first day, the collections dropped badly even on the weekends. Akshay Kumar’s Airlift received an exceptional response from the audience which made the collections of KKHH 3 fall down further.

The film fell flat on the weekdays and the movie made Rs 29.1 crores in its first week which is below the expectations. Trade analysts have declared that KKHH3 is a debacle. Ekta Kapoor and Shoba Kapoor produced the movie on Balaji Motion Pictures banner.