Legends of Tomorrow Season 2 Episode 12 Spoilers, Air Date, Promo, 2×12 Synopsis, S2E12 News, Updates & Images: In this past episode of Legends of Tomorrow, we get to watch the team of Legends fighting against the now evil Rip Hunter. And two weeks down the line, we will get to see at least two members of the Justice Society of America (JSA).

The Legion of Doom received a piece of techno-artefact, and with its help, they reprogrammed the brain and memory of Rip Hunter and made him an evil guy. Thus, making him officially a part of the Reverse-Flash’s team. At least for two weeks, Rip will be by the side of the Legion of Doom.

Also, the Justice Society of America (JSA) will make their presence felt as they will help the legends to protect the pieces of the spear of destiny with which anyone can alter the reality. It’s the same artifact that Eobard Thawne needs.

As the official synopsis reveals that the fragments of the same artefact have been well guarded by the JSA in different time periods, the legends will travel to two different time periods to help them keep safe. With the latest information, the Legends will head to 3000 and meet Dr. Mid-Nite. In the future, they will come across King Arthur’s Camelot and find Stargirl protecting her piece of the Spear. 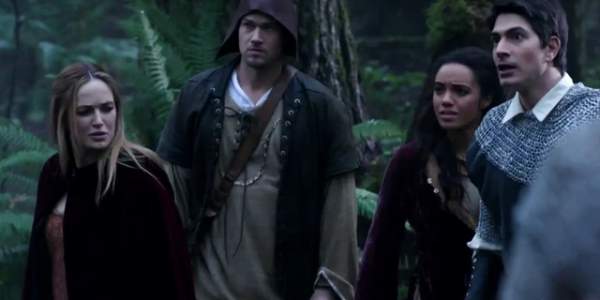 The Legends will make the team with the Knights of the Round Table to secure the parts of the spear from the evil Rip, Hunter. The Legends of Tomorrow 2×12 official synopsis reads the following.

The Legends continue their quest to hunt down the Spear of Destiny before the pieces fall into the hands of the Legion of Doom. The Legends discover that pieces of the Spear are each being guarded in different time periods by members of the JSA. Their first stop is the future where they find Dr. Mid-Nite (guest star Kwesi Ameyaw) which eventually leads them to the past and King Arthur’s Camelot, where Stargirl (guest star Sarah Grey) is protecting her piece of the Spear. In order to protect the Spear shard from the now-evil Rip Hunter (Arthur Darvill), the Legends must join forces with the Knights of the Round Table.