The Reporter Times Latest Entertainment, Tech, Political and National, International News
Home Entertainment May the 4th Be With You: When Is Star Wars Day 2019...
Advertisement

Star Wars Day: It’s the time to say May the 4th Be With You because today it is. Every year, it is observed on May 4, 2019. The Jedis (fans) will get ready with their lightsabers – it’s just for fun! It is celebrated by the lovers of the Skywalkers, the Resistance and Yoda’s wise words.

This year, it is going to take place on May 4, 2019, Saturday while many are celebrating already across the world. The SW fans will pick one of the films to enjoy the day from the one of the most popular franchise. It is the first StarWarsDay after the death of actress Carrie Fisher. She had portrayed the character of Princess Leia in the Star Wars movies.

How can you celebrate Star Wars Day 2019?

There are many ways for the celebration. One of them is to enjoy the sci-fi fun with comics and films. The owner of the movie franchise, Disney organizes and hosts a number of related events at their parks. It includes the famous Star Wars Night on May 5 and 6 at Disneyland Paris.

You can also do a donation on this specific day like actor Mark Hamill did last year. In 2016, he urged the fans to donate survival things – food and money to help the sick kids. Hamill played Jedi Luke.

The movie lovers and especially, the Star Wars fans are really excited about the upcoming film Star Wars 8 aka Star Wars: The Last Jedi. It will be released on December 15, 2017. The trailer and teasers are already out.

You can also go to see the new Star Wars themed lands at the Disneyland and Disney World. 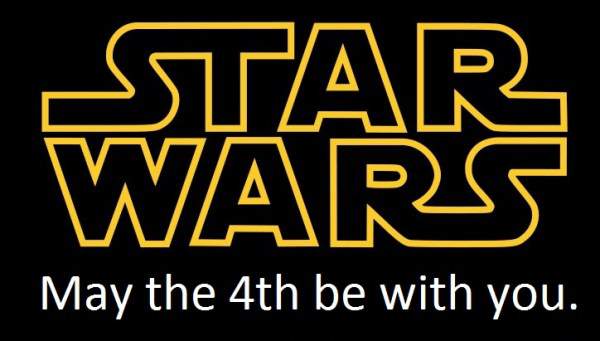 What are the Star Wars Films in Chronological Order and their Release Dates?

You must have heard people saying/wishing May the fourth Be With You. But, do you know why do they say so? it is because of the date for Star Wars day was chosen to be played in the words fo the Star Wars quote – ‘May the Force be with you.’

In the movies, various characters wish each other with this quote as it is considered as an individual good luck. They wish their allies to be successful having favor with the Force.

The film franchise started in 1977. The first movie was Star Wars 4: A New Hope. As soon as it was released, it became a worldwide phenomenon. It became the reason for the release of books, a tv series, video games, and comics.

What is Star Wars day?

It’s time to know why the SWD is celebrated and what is it? The day was chosen to celebrate the Star Wars franchise films created by George Lucas. It became immensely famous worldwide and made millions of fans.

But, you should note that this event wasn’t the creation of Geoge Lucas or his company Lucasfilm. It is generally observed by the fans around the world.

‘ May the 4th be with you ‘ was first created/coined by a newspaper in its advertisement by the conservative party on May 4, 1979. On this day, Margaret Thatcher started the office as the UK PM.

The Walt Disney Company bought the rights to Star Wars and Lucasfilm in 2012. Now, it hosts celebrations in its Disneyland and Walt Disney World theme parks.

The Twitterati and fans make the hashtag #MayTheFourthBeWithYou ( May the Fourth be with You ) trend on Twitter around the world, every year. Many fans will be seen sharing their celebrations.

Are you celebrating the occasion, too? Let’s know how do you prefer to enjoy the event? Feel free to air your views and thoughts with us via comments.

Stay tuned to TheReporterTimes for latest Entertainment news and related updates around the globe.