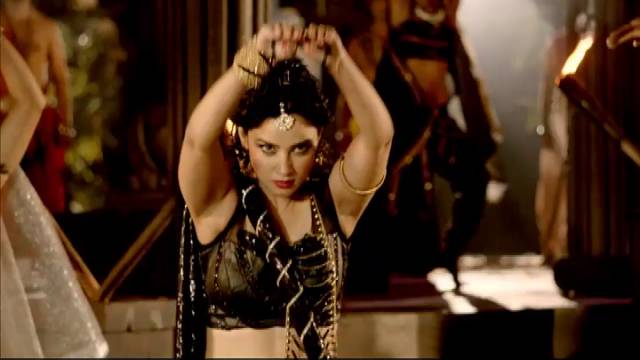 This episode of Naagin has raised many unanswered questions in the audience minds. Today Naagin started by Sesha and Rhitik’s hide and seek job later the things turned out to be worse for the characters. Checkout the whole episode of Naagin.

Sesha spotted at Naagmani and understands that today is the day when Shiva’s third eye is going to open. Sesha decided to make Shivanya aware about this as Rithik can be there at any point of time. Rithik arrived there and spotted the Nagmani as a golden light was going off from it. Shesha informed Shivanya about his presence. Rithik enters in temple and discovered the footprints, meanwhile Shivanya turned into a snake. Aghori sadhus came and surround the Naagmani.

Rithik founds his responsibility as a king whose duty is to protect the spiritual powers in a flashback. He falls down on the floor as the flashback ends, Shivanya comes and tries to make him awake in human’s attire. Meanwhile Sesha and Gurudev enters in the cave in which the Naagmani was kept. Guru maa comes from opposite side with Ankush, Ankush tried to shoot Gurudev. Sesha advised him to drop the plan for now.

However, Yamini was successful in reaching to the naagmani wearing a burqa type of suit. After finding out that it was protected by the snakes, she left it bare handed. Ankush objects her desire of obtaining the Naagmani. She shuts his mouth up by telling that he is merely a gardener and he should understand it.

Ankush was not able to identify her, she reveals that she is Panchner’s princess.

Rani and Raja were spending the time very peacefully where Yamini was acting like step sister of Raja and won his trust. Afterwards it was revealed that she planned out the controversy to steal the Naagmani, later Ankush saved her life after being attacked by the snakes protecting the Naagmani. Later Yamini has offered him 50% of the value after selling the spiritual stone and agreed to marry him.

They told the same to Raja and he happily accepted their relationship. Yamini told him the brutal reality that she was not able to obtain the stone even after killing all the snake guards.

Ankush asked her about the current position of Naagmani, she informed that only Sangram Singh knows about the same and he is the only one who can gift them that. They both decided to go to him and ask for the Naagmani.

Sesha give first aid to Gurudev and assures him that she will go and protect the Naagmani at any cost.

Ankush and Yamini told Raja to come with them to the cave and take out the Naagmani for them. He refused to support them in any case. Yamini blackmails him by tempering him that she would allow him to meet his son after getting it. She blackmails by showing a fake picture of Rithik that she would kill her if he would not accompany her.

Shivanya took out some herbs for Rithik and hopes for his speedy recovery, while Yamini and Ankush reached back to the house. Yamini went inside in a black saree and started crying that she is ultimately worried about Rithik. Shivanaya comes with Rithik back to the house and told that there was no naagin there and he doesn’t have any bite marks too. Yamini keeps on going her drama and thanked Shivanna to return her son back well being.

Sesha and Shivanya exchanged their day ideas. Sesha informed her that there is some magic in the cave which is resisting them to enter into. They decided to figure it out. Yamini informed Ankush that she is wearing a locket to protect herself while he told that he is wearing a ring. She keeps on mocking him for being a under smart gardener.

In the next episode of Naagin it would be interesting to see what step will Yamini take as Ankush and she knows each other’s truth very well now.