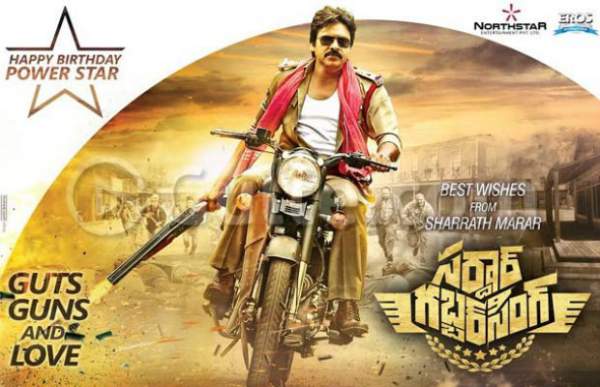 Sardar Gabbar Singh Teaser: Powerstar Pawan Kalyan is the most wanted actors in Tollywood and he has stupendous craze all over. After a series of flops for over ten years, he is back to success track with GabbarSingh which is said to be the remake of Bollywood super hit movie Dabangg. (check: No Action In Salman’s Kick 2.)

Harish Shankar directed the film which smashed all his existing records all over. Sruthi Haasan played the female lead and Devi Sri Prasad composed the music. Bandla Ganesh produced the flick and Pawan has been quite careful after a massive hit like it.

He scored an industry hit with Atharintiki Daaredi later which has been directed by Trivikram. The movie impressed all the sections of the audience all over and Kalyan has been delighted with the back to back hits. He then teamed up with Venkatesh for Gopala Gopala which ended as a decent grosser all over.

After a huge gap, Pawan Kalyan is currently shooting for his next movie Sardaar Gabbar Singh which is not a sequel for his super hit movie GabbarSingh. KS Ravindra (Bobby) who made his debut with Ravi Teja’s Power is directing the movie.

Pawan will be seen as a cop in the film and Devi Sri Prasad is composing the music. The makers have released the first look teaser of the movie before the audio release. The teaser has taken the social networkings by storm and it crossed 1 million views in just 1 day. The teaser even received over 45000 likes which is huge for a Telugu film.

The teaser created enough sensation all over and the audio of SGS has been planned to be launched on March 20th in a grand event in Hyderabad. Megastar Chiranjeevi is expected to grace the event and he will release the audio of the movie.

Sharat Marar is the producer and he is producing Sardaar Gabbar Singh on North Star Entertainments banner. Pawan Kalyan Creative Works is presenting the film.

Eros International acquired the theatrical rights of the film worldwide and the movie has been slated for a massive release on April 8th across the world. Sardaar Gabbar Singh will release in Hindi also in record number of screens.