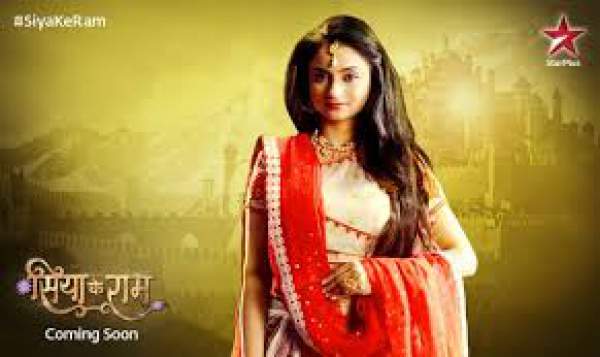 Siya Ke Ram 23rd January 2016: The episode begins with Devi Parvati rejoicing about the union of Shri Ram and Devi Sita. She further questions the Shri Ram incarnation in human form.Mahadev replies that the reasons vary and no one can know any as when Dharma comes to its testimony many egoistic adharmi Rakshas are indulged in evil activities and Shri Ram took an avatar to retrieve Dharma back. (see: Airlift collections.)

Devi Parvati insists on knowing main reason. Mahadev further says Narayan wants to set an example that truth and righteous life can be lived even in hard times and Gods help such human beings. She asks that there will be  some reason behind Ram and Sita’s union to which Mahadev replies yes! And that they will do earth’s uddhaar and write a new story of humanity.

Ram and Sita smile seeing each other. Urmila wishes Sita blissful that her belief came true as her fate. Suddenly from somewhere Parshuram comes yelling and is ticked off seeing the Shiv Dhanush Broken.Janak welcomes him in Mithila and greets him. (see: All Episodes of SiyaKeRam.)

He yells – who dared to break the Lord Shiv’s Dhanush and warns for the doer’s death. Janak says that he kept Sita’s Swayamvar on his advice keeping the challenge of picking and stringing the Dhanush.Parshuram says that he asked to string it, not to break it. He called it sinful act and said that the guilty must die.Parshuram still in anger yelling to all to answer. Laxman says that your questions don’t end, how can we answer you and he even show his disregard for Parshuram’s anger on this auspicious moment.

Parshuram boasting of his anger effect asks about the guy who broke the Dhanush. Laxman replies that they all have heard stories of Parshuram killing innocent warriors by his anger.Urmilla and Mandvi show concern for Ram. Meanwhile, Vishwamitra greets Parshuram and introduces him to Dashrath’s son Ram and Laxman. Parshuram screams and asks Janak to answer or else he will turn upside land in Janak’s Rajya making everyone scared.

Ram says that the sinner will be his servant but Parshuram denies, saying that sinner will be his enemy. Either he should accept the crime or he will be the reason for the death of all Prince present there.
Laxman further adds on the heat asking Parshuram as why he didn’t come when they broke other Dhanush during their childhood. He gets a scolding from Parshuram for comparing Lord Shiva’s Dhanush with any ordinary Dhanush. Vishwamitra apologizes to Parshuram and asks to ignore their mistakes. Parshuram gave the final warning and Ram accepts his doing and fold his hands..Ram Ram plays…

Raavan arrives at Lanka and memorises his failure in getting the claim of Mahadev Dhanush and offers 10 heads. He says that I am your biggest devotee and blames Mahadev for cheating him. Not being able to lift his Dhanush was his biggest humiliation. He further adds that he is hurt and all those who were afraid of him now mock at him and ask Mahadev to leave his Lanka and head back to Kailash.

Ram walks towards Parshuram and everybody is tensed. Ram makes himself clear to Parshuram that he never intended to insult Lord Shiva. Prashuram exaggerates the sin but Ram calms him down saying that elders just bless and not get angry. Parshuram says that you are the sinner and you are giving me GYAN and asking me to forgive you. He asks him to fight or else he will be killed along with his brother.

Ram denies this, saying that a fight between a Lord and devotee will be considered in relation to ego and power whereas the matter is entirely different. But Parshuram asks him to get his weapon. Laxman burning in fumes of anger and Sita’s eyes filled with water. Everyone is dazed.