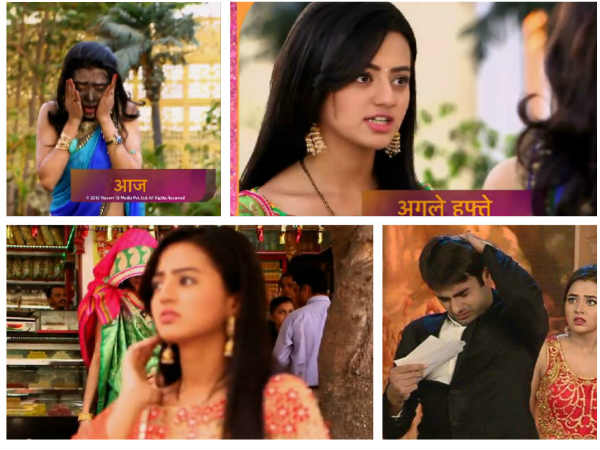 Swaragini 25th March 2016: Swaragini 25th new episode is out. Swara and Sanskar go to the plot no. 211. They are spying on Karthik. See what happened next. The episode begins with Sanskar and Swara following Karthik. He thinks that someone is following him and goes off on his bike. (check: Swaragini 22nd Mar. 2016.)

Swara follows him while Sanskar checks his place. He finds a woman sitting in the chair and thinks she is Kavya but finds a dummy. Swara follows Karthik and sees him meeting a woman. She sees Kavya and Kavya ask Karthik to give the file.

Sanskar calls Swara and says it is a trap, and she breaks her nail breaks by accidentally hitting against the wall. Karthik and Kavya hear the sound and Swara hides under the sofa. Sanskar asks her to be careful and asks her to take some proofs. Swara takes their pic as a proof and locks them up in the house. She calls Inspector and asks him to come immediately. (see: Swaragini All Episodes.)

Karthik finds the house being locked and Kavya sees Swara. She holds her neck and Karthik manages to unlock the door and Kavya escapes. Sanskar comes, and Swara hugs him. The inspector comes and asks Karthik about Kavya, and he says she is dead.

Swara asks him to tell the truth and shows the pics. He says this pic is ten days old. Inspector means you are making fun of a dead woman and leaves. Karthik says to Swara that he has won and said no one can find Tania too. Kavya’s blood falls on her shoulder as she is on the terrace. Sanskar asks Swara if she is hurt, and she says no. She says it might be Kavya’s and looks up.

Swara tells Sanskar that she is hiding here. Swara says she thought she would take Ragini and Laksh out of this. Constable gives food to Ragini and Laksh. Laksh asks her about her brother? As constable leaves, he asks her to eat.

She removes chilly from his food as says he will get hiccups because of it. He gets teary eyed. She said that, this time she will not take anything in exchange for her help. Kavya and Karthik see Sanskar and say we will outrun them this time.

Stay tuned to The Reporter Times for latest Swaragini news and other TV serials’ updates.