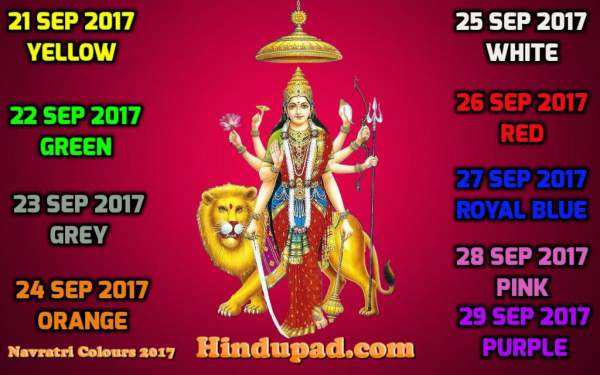 Navratri Colours 2018: Navratri 9 Colors To Wear, Dress On Each Day of Festival: In India, there are many festivals which are dedicated to particular god / goddess. It is one of them, and it begins on October 10, 2018. This fest is dedicated to the Hindu deity Durga. The name of the festival tells everything. Navratri means “Nine Nights.”

During these nine nights and ten days, nine forms of Devi are being worshipped. The tenth day is celebrated as Dussehra, which is also commonly known as Vijayadashami. This festival is celebrated with total enthusiasm in every Hindu country like India and Nepal. And after 20 days from Dussehra, Deepawali will be celebrated on 7th November 2018.

This Navaratri is also known as Sharad Navratri. This dress colour code is followed by women mainly from the regions of Gujarat and Maharashtra. You will be surprised to know that the deity is being worshipped by Muslims of Bangladesh also.

Now, the season of the festival has been started. From Navratri to Diwali, there are lots of festive events which fill our lives with full of happiness. Coming to the way of celebrating Navratri festival. This fest on different days has different dress colour codes. These Nine Navratri Colours 2018 are being listed below.

These Navaratri colors 2018 have their significance in this festivity. People like to wear, dress clothing like saree / sari of the following list of colors for Navratri 2018 during nine days of celebrations. Check: Navratri wishes.

If you have any query about the festival, then feel free to ask by commenting below. Stay tuned to TheReporterTImes for more.