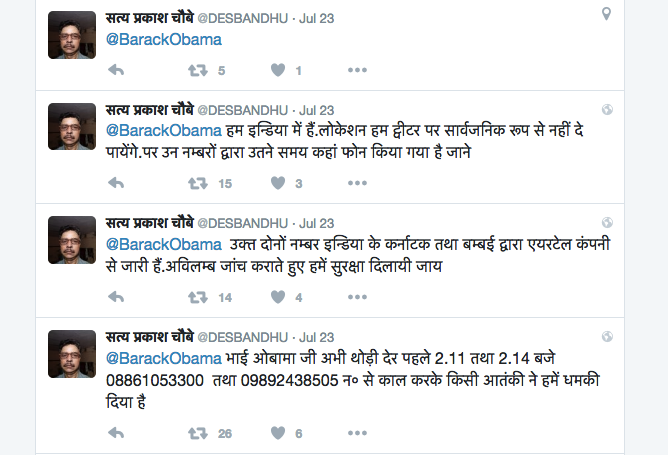 The reason why #सतपरकास is trending in India.

Seeing an unprecedented development in social media stories, a person named Satya Prakash Chaubey had demanded security cover from President of India and United States. Tweeting on the latest China’s incursion at India’s border he tweeted a series of tweets demanding security cover.

He wrote on twitter that ‘Terrorists doing incursion at India’s border should be killed immediately because they are threat to the nation.’

Not sure, whether he had ever applied for a job as President’s councillor. He had even advised Barack Obama to do investigation of a phone call. The story doesn’t end with that, he has also provided the number from which he received the death threats.

He wrote openly to his ‘brother’ Barack Obama

I received two threat calls from two numbers today which are given below. Both the numbers belongs to Karnataka and Mumbai branch of Airtel company.

But Obama must be sad because on the last tweet he refused to disclose his location because of security measures.

Barack Obama and Justin Trudeau Give Diwali Wishes and Greetings