The Reporter Times
Home Technology Customers are planning to drag Amazon in court for cancelling orders of... 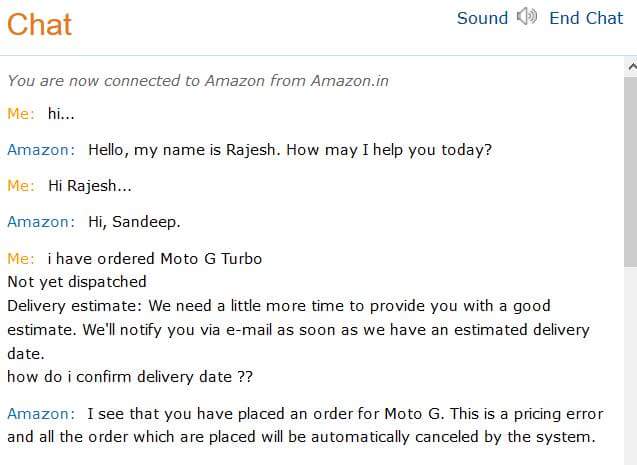 Customers who were ‘betrayed’ by the e-commerce giant for not delivering the handsets are planning to drag Amazon in Supreme for ‘Amazon Fraud.’ Some users even claimed it as one of the biggest scams in India’s history.

Today Morning users got an offer by using a promo code and booking Moto G Turbo edition priced at 12,499 rs for 4,999 rs. However when we asked Amazon for its response, they simply stated it as a technical glitch in a 3rd party promotional offer with no endorsement from the portal.

Was it an intentional mistake?

The mobile phone was sold by Cloudtail, a 49:51 joint venture between Amazon Asia and Infosys founder NR Narayana Murthy. [Source]

Can customers go against Amazon.in to customer court

Yes, technically it’s possible to go against Amazon because of Indian Contract Act. However, the offer is not the completion of an offer and just an invitation to offer, but those people who completed payment have completed their part of the contract. Hence, the people completed payment with online the method can go to the court after appealing company.

Otherwise, other people can raise the issue in consumer courts.

Rest is all on the court whether they will accept the case or reject it. There is an online portal by govt named

A Petition on Change.org have got 854 supporters appealing court to act against Amazon.

We have trimmed portion of customer’s chat to make it easy for understanding.

Another chat between Jignesh and Amazon representative Tissya

I am going to file a consumer complaint on amazon those who want to be in it
email me on jigneshjain1853[at]gmail.com
Tissya: Hello, my name is Tissya. I’ll certainly try to help regarding your concern.
Tissya: I would like to inform you that Amazon is currently not running any promotional offers for this product.
However as soon as we have information, it would be displayed on the website.
There might be many spam messages circulated over social networking site.
Due to a bug, the offer might be applied.
However, we are not running currently any offers on the product.
Tissya: Hence, all the products are getting auto cancelled.
Tissya: The order got confirmed by Amazon due to some technical glitch.
Tissya: This was a third party promotion which was not supported by Amazon.
Tissya: All our regular and valuable customers know that all the promotions authorised are published only on our site.
Could you please let me know where you have received the code from?
Further this code was already available in the reviews section of the item. which is monitored by Amazon
Tissya: Yes and you would also agree that our promotions are only available on our site. This promotion has not been published on the Amazon site . Could you please help me with the link ?
Tissya: It is because of the technical glitch that it has happened. Now, as the issue is rectified, all the orders placed with this promotion got auto cancelled.
Tissya: Please give me 1 minute.
Registered office address: Brigade Gateway,8th floor, 26/1, Dr Rajkumar Road, Malleshwaram(W), Bangalore-560055, India

We are waiting for Amazon’s response in the matter at touch[at]thereportertimes.com