After Gears of War 4, a third person shooter game, a movie was announced by the Universal Pictures. Dave Bautista is portraying the lead role of Marcus Fenix in the film. In a tweet by studio head at The Coalition, Rod Ferguson, he shared that this film is being developed in partnership with Microsoft and developer The Coalition.

As per the reports of Variety, the director-duo of Scott Stuber and Dylan Clark are guiding the development of the Gear of Wars film. The team of the film has enough experience to make it happen. It can be the very interesting sci-fi movie having larger than life character, giant sets, and action which everyone desires to see. 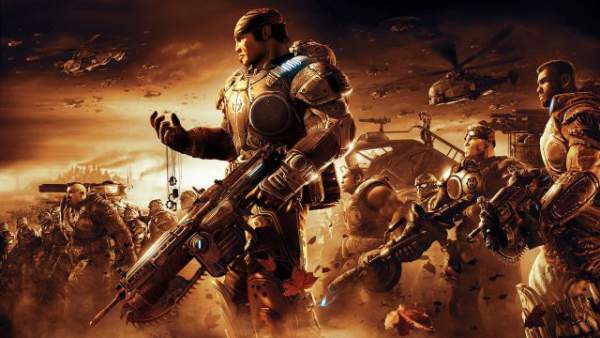 As we know the Gears of War is the game which is a complete package of ups and downs, many tragic, and many melancholic moments. Hence, this all we can also expect in a movie. The film is currently in works at Microsoft and Universal, as of October 2017.

Update May 3, 2017: The film has hired Shane Salerno who is also the writer for the four sequels of James Cameron’s Avatar film and The Cartel for director Ridley Scott. He is also known for writing Armageddon and Savages.

The Gears of War Universe: Game

The plot of the story is based on the planet named Sera similar to the Earth. The first game begins 14 years after Locust, a very dangerous and mysterious species emerges and finishes most of the humankind. After this attack, also known as Emergence Day, the survivor of this attack escapes to the Jacinto Plateau. This plateau is very hard to the Locust’s reach as it located on top of the rock.

In first three games of the series, the main character is Marcus Fenix, a Gear soldier who has Dominic “Dom” Santiago, Augustus Cole, Damon Baird, and the others in his Delta Team. They are on the mission of discovering the source of the Locust and destroy them from the roots. They also have the responsibility to vanish the new Lambent menace who is a threat to both humanity and the Locust.

After 25 years, the fourth game starts. Humanity is facing a new threat in the form of Locust-like species known as the Swarm. This new species is kidnapping entire human colonies. The only hope for the humanity is Marcus’ son JD Fenix. He has to follow his father’s footsteps in order to fight with an enemy.

We do not have much information regarding the upcoming movie. The timeline and feature of characters are yet to be announced officially. In an interview with the Variety, Fergusson gave a clue that this film will have new features of the same universe. He also added that they are making this story for gamers as well as for the rest of the people. Because it is very necessary for the movie to be successful.

There are many rumors about the releasing date of this flick. Initially, there were many personal stories about the personal stories. In other news, people are predicting that movie can come in parallel to the events of the games. It is possible but with the totally different team of Gears.

We can find the similarity between this game and COG forces. So it will be a very clever move for multiple COG operations to occur simultaneously. In this, we may get to see that who all will leave those mysterious COG tags everywhere.

What’s New in the Gears of War Movie?

Earlier also GoW has gone out of the original trilogy. The fourth game of the series named GoW: Judgement didn’t perform up to the mark, with lower score and sales as compared to the previous games. As we all know this game had stories surrounding Emergence Day.

The latest game Judgement lacks the main series protagonist Marcus Fenix. This can be one reason of poor performance but as we have seen in the promotional video of the game, GoW4 is coming back with the Fenix family tree and new protagonist JD. Without the presence of iconic characters like Marcus and Cole, it will be difficult for the Gears of War film to connect with the audience. Because these characters are the most popular among the fans.

There are many rumors spreading from the last two years about this series. And it is a surprise for the film critics that why the studio did not release the movie around the release of GoW3 because at that time it was at peak of its popularity. In that period studio was fighting to get the rights to the video game.

According to Fergusson, this movie is a step to support the franchise he also added that

“We’d done comics and novels in the past but the opportunity to work with Universal to bring the movie to life was perfect.”

June 2018 Update: Former WWE Wrestler Dave Bautista is going to play the lead role of Marcus Fenix in the movie.

It hasn’t been released yet. So, it’s clear that we have to wait for long time to see GoW movie into theaters.

Stay tuned to TheReporterTimes for latest movie news and entertainment updates around the world.