Seven Deadly Sins anime movie: The release date, its trailer, cast, much more have been revealed by the officials. The upcoming anime film has been titled The Seven Deadly Sins the Movie: Prisoners of the Sky (Gekijōban Nanatsu no Taizai Tenkū no Torawarebito).

Noriyuki Abe and Yasuto Nishikata are the chief director and director at A1 Pictures respectively. Makoto Uezu has written the script while Hiroyuki Sawano has composed its music. Keigo Sasaki has served as the character designer and chief animation director. 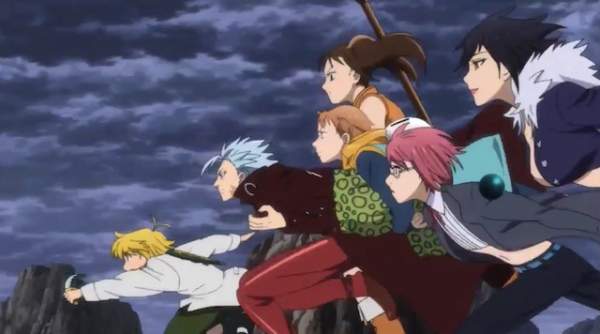 Here are the new characters which are added. The first one is Tsubasa Yonaga who will also be known as Sorada – a young man and a heavenly winged person from Sky Palace. He comes to search legendary Lord Oshiro to protect Sky Palace from the Demon Clan.

The second is Haruka Tomatsu who will portray Ellatte. She is a young woman and a heavenly winged person who looks like Elizabeth. She, a determined tomboy, has made a promise to Sorada and believes in it. She is also waiting for him to return to the Sky Palace.

The third one is Toshiyuki Morikawa as Bellion. Bellion is the leader of the Six Knights of Black of the Demon Clan army. He uses a large one-handed sword to fight. His strength is similar to the Ten Commandments.

The anime film will have a new story written by manga creator Nakaba Suzuki. It goes like this.

It has been only a little time since The Seven DeadlySins and Princess Elizabeth brought peace to the kingdom. For the birthday celebration of the King, The SDS go in search of the phantom ingredient ‘sky fish’ on a remote land.

While searching, Meliodas and Hawk reach a place known as ‘Sky Palace’ which exists above the clouds. The Sky Palace’s residents have wings. Then, the law abiding authority take Meliodas in prison after being mistakenly thought as a criminal boy.

How To Watch Online

The manga written by Suzuki was adapted into an anime series with 24 episodes. It was released in 2014 and 2015. Later on, Netflix published and streamed the series in both Japanese audio and English dubbing. Then, FUNimation made it available in two parts on home video.

It was a four episode television anime titled  The SevenDeadly Sins: Signs of Holy War which released in August 2016. Then, Netflix streamed it in February 2017. After that, the second season titled The Seven DeadlySins: Revival of the Commandments premiered in January 2018.

Stay tuned to The Reporter Times for more anime updates.