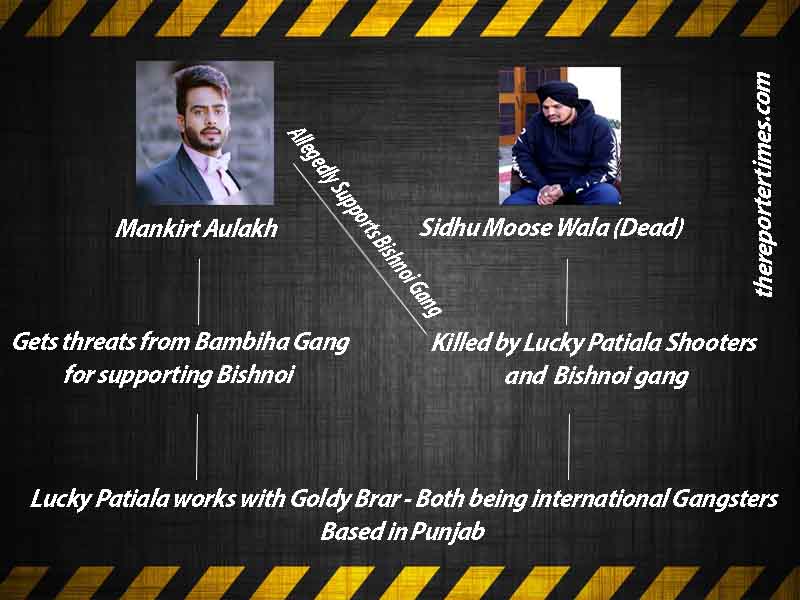 In March 2022, Mankirt Aulakh received a death threat from Bambiha Gang. Davinder Bambiha’s gang is the rival gang of Lawrence Bishnoi’s gang. According to our sources, the Bambiha gang and Bishnoi gang are close associates of Canadian Gangster Goldy Brar.

According to a Facebook post by members of the Bambiha group, they’re angry because of Makirt Aulakh’s close association with Lawrence Bishnoi. The post also claimed that many singers in the Punjabi music industry are scared of Mankirt Aulakh because of the same.

The Bambiha gang accused Manikrt of acting as an agent of the Bishnoi gang for investing in new talent.

Aulkah shot a number of songs in Canada. His primary shooting location for high-budget songs remained in Canada for years. His videos dominate the industry’s top charts. His videos like ‘Gangland’, ‘Badnam’, and ‘8 Raflaan’ are quite popular among youth for inciting gun use.

Mankirt Aulakh’s close aide Director and Actor Parmish Verma was shot by members of a gang in 2018.

Earlier, the gangster’s team member had revealed that Mankirat Aulakh is their target. In this, the involvement of a gangster with the alias Lucky Patial was revealed. Lucky Patial is in Armenian prison as of the moment.

Mohali SSP Harjit Singh also confirmed that a person named Hardeep Singh alias Jodha has been caught. He is associated with Lucky Patial. He said that Singer Mankirat Aulakh’s application has not come yet but the CIA keeps probing it. The police are in constant touch with Mankirat.

Lucky Patial’s sharpshooters were involved in the murder of Sidhu Moose Wala.