Today was the Day 23 of the Johnny Depp vs Amber Heard Trial. After facing public humiliation for presenting ‘Photoshopped’ honeymoon pictures, Amber Heard Testimony was Recorded in court today. There were some heated moments during the last minute of closing arguments; let’s find out what Amber Heard’s Testimony revealed as a new development in the case.

Accusing Depp and his team of harassment, humiliation, and threatening her. Heard claimed that there were some people who wanted to kill her. In her own words, Amber Said:

Heard: I am harassed, humiliated, and threatened every single day. Even just walking into this courtroom, sitting in front of the world. Having the worst parts of my life, things I’ve lived through, used to humiliate me. People want to kill me.

She added admission to threat to her child, by adding in the court that:

People want to put my baby in the microwave and tell me that. Johnny … promised me that if I ever left him, he’d make me think of him every day I live.

However, ThatUmbrellaGuy, who is kind of leading the consortium in favor of Johnny Depp and his team on Twitter, refuted the allegations.

Why? Because it's EVERYONE ELSE'S FAULT.
It CANT BE Amber Heard's.

Amber Heard Testimony also highlighted the cyberbullying she is facing due to the trial. She claimed that she is living through a ‘trauma’ because of the ongoing bullying. She added:

In the harassment and humiliation, the campaign against me that’s echoed every single day on social media. And now in front of cameras in this room. Every single day I have to relive the trauma. Perhaps it’s easy to forget that, but I’m a human being.

Amber Heard made sure to register the death threats she is receiving in her Testimony. She claimed that people were mocking her testimony. In her words, Amber Heard Said that

I receive hundreds of death threats regularly, daily. Thousands since this trial have started. People are mocking my testimony … The most humiliating thing I’ve ever had to go through. I hope no one ever has to go through something like this. Johnny has taken enough of my voice. I have the right to tell my story … I have the right to my voice and name. He took it long enough. Heard’s direct examination concludes. There is a sidebar ahead of cross-examination.

Cross-examination of Heard commences as Vasquez zeroes in on the deposition of Morgan Night of the Hicksville Trailer Palace. “I’ve heard a lot of people say a lot of things to be involved in the Johnny Depp Show,”

Vasquez changes the topic to Morgan Tremaine’s testimony and the TMZ paparazzi video. “I had actually no idea whether they were going to be there or not,” Heard says of Tremaine’s docking at the courthouse when she filed a TRO.

In the earlier parts of Amber Heard’s Testimony, there were no mentions of copyrights to the paparazzi video, She refuted the claims of leaking that video by adding:

The copyright ownership of that is news to me. I learned that yesterday. Heard goes on to testify that if she wanted to leak something, she could have done it sooner and more effectively.

Yesterday, Morgan Tremaine refused to reveal any more details about the Copyright Owner of the said video. 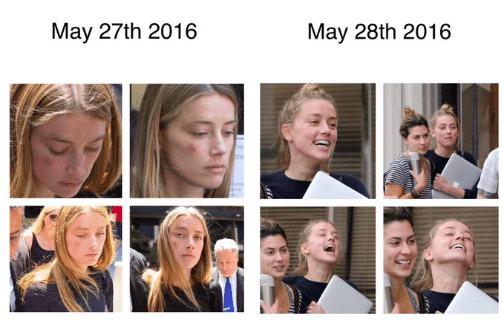 Vasquez ripped up a photo of Heard and “Rocky” Pennington on May 28, 2016, a day after the TRO was filed. Vasquez added that there is no bruise on Heard’s face, though Heard fires back, saying she was wearing makeup. The photo of May 27th, 2016 was the one on basis of which TRO was filed.

Heard added in her defense: If [the photo] was taken as you represented, there is obviously a bruise on my face. It’s covered by makeup, as per usual.

The closing arguments of Amber Heard Testimony got tensed after a heated argument on the said picture. As the court started getting tensed, Vasquez got off the stage.

Heard’s cross-examination concludes with a rapid-fire series of questions by Lawyer Vasquez. “I know how many people will say whatever for him. That’s his power. That’s why I wrote the Op-Ed,” Heard testifies at the end of the argument.

Later Amber Heard added that Johnny Depp promised to ruin her and take away her career. “Death was the only way out,” Heard testifies as her redirect examination concludes.

What do you think about Amber Heard Testimony on Day 23, Do let us know in comments