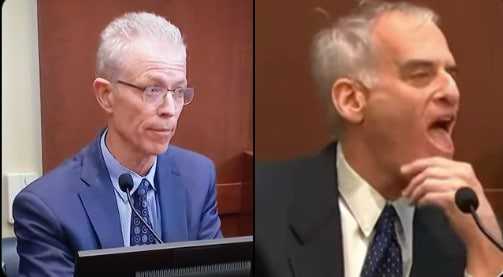 According to Stanford, he is a Professor of Psychiatry and Behavioral Sciences. His research is focused on Children’s Psychological issues and Trauma. He has published 80 peer-reviewed papers so far.

Dr. Richard Shaw is reported to be a Psychiatrist who became media prominence after getting linked with the trial between Johnny Depp vs. Amber Heard. His opinion on the forensic evaluation of psychiatrist reports is asked for the trial by Johnny Depp’s team.

Dr. Shaw narrows in on Dr. Spiegel’s insights about Depp’s response time. Dr. Shaw says this observation was made by watching a video deposition of Depp, in which Depp had just flown back from London and was likely exhausted. He vowed for “careful diagnostic tests” before judging anyone’s personality.

As we know, Heard’s attorneys continue to show their defense in the actor’s $50 million lawsuits and try to ascertain her side of the $100 million countersuits.

“He violated ethical principles” – Dr. Shaw on Dr. Spiegel. Dr. Shaw’s testimony is believed to be much stronger than Dr. Spiegel’s since he is very much senior in terms of experience.

Dr. Shaw was called to test Dr. Spigel’s take on the Goldwater rule. Dr. Shaw clearly wiped the credentials while proving that Goldwater rule was not followed.

During his testimony, Dr. Spiegel suggested that Johnny Depp’s behavior during his relationship with his ex-wife Amber Heard was most likely connected to substance abuse. Furthermore, Dr. David Spiegel asserted that he had tried to meet and interview the Pirates of the Caribbean

Advertisement
star twice to evaluate the 58-year-old actor better but was declined both times.

He claimed that Depp’s one-time therapist requested him to recall the three words for five minutes and then repeat them. However, the actor was reportedly incompetent to remember the words. Dr. Spiegel added: ” Mr. Depp was unable to recall any of them, and that’s very unusual for a 50-ish-year-old male.”

Dr. Richard Shaw said on the three-word test, “I have not personally interviewed Mr. Depp, so I can’t speculate.”

The police force around the country usually does this three-word test to check for drunk and drive cases.

Who is Dr. Richard J. Shaw

His latest Fellowship was from Stanford University School of Medicine (1993) CA. Dr. Shaw completed his residency at Albert Einstein College of Medicine. He is currently working as a forensic psychiatrist.

The actor has rejected the claims of violence. Johnny Depp claimed that he never hit Heard while claiming that she was the abuser in the relationship. Besides, Heard has testified about more than a dozen instances of physical abuse. According to Heard, she suffered at Depp’s hands. The surgeon who did not treat Depp testified that Depp’s explanation is doubtful, in large part because his fingernail remained unchanged.