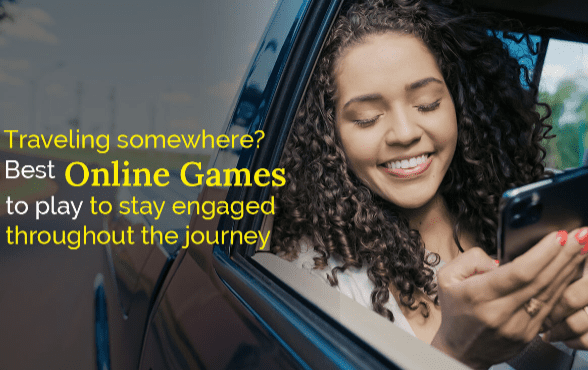 Traveling somewhere far has always been boring. It is wise to take something with you that keeps you occupied; otherwise, the journey sets you dull. The journey feels comparatively lighter if you are engaged in something, and the time feels shortened. For most travelers, online gaming seems to be an easy way out as it incorporates the aspect of putting oneself through an act of socializing while not having to indulge in too many conversations.

Fortunately, there are plenty of games you can enjoy online while on the bus, train, or taking a flight. Even if you do not have co-passengers to engage with, online rivals will surely keep you occupied for the rest of your time.

The list below has curated some of the best online games that will keep you engaged all the while when you are traveling.

If you love card games, UNO online would be nothing short of paradise for you. The game started by being available as normal cards, but gradually, as everything started to shift online, it also introduced its online version. Every player is offered seven cards each to begin the game. The player must match the cards drawn from the pile to set the game into motion. Players have to lose cards from their hands before the opponent does. The player who can discard their cards the fastest wins the game.

The online game has three levels which consist of easy, intermediate, and difficult. You can also choose the number of players you will face in each round to level up the challenge in the game. Each game takes up a longer amount of time than the usual card game, and players are seen to lose from their UNO stage of the game, making the results quite unpredictable. This game kills time in an instant and is a must-have when traveling.

MPL Ludo offers the best ludo experience online and delivers rightly in all segments. Known to everyone as one of the oldest games in the country, Ludo has a huge following and has been ranked as the top played online game in 2020. Ludo is played among four players that you can easily get online, and the rules are quite simple. Each player gets to choose one color and is given four tokens each. Players have to roll the dice to get numbers to push their pieces forward in the game. MPL has kept the classic style of the game intact by incorporating some new changes within the game. The matchmaking on the app is also quite interesting, and you will get really strong players that will keep up with your gameplay round after round. In this game of ludo real money is involved, so your time on the app is technically quite profitable.

New modes, like Ludo Win, have made the game even more interesting. The gameplay completely changes, and people have to follow their instincts and keep up with the limited moves to counter their rivals. The many variants and the new style will keep you occupied for hours, and you will not know when time flies.

This medieval-style strategy game is popular with online gamers and has millions of downloads. To start the game, you will be provided with a village which you have to build from scratch using resources and in-game gold. There are numerous characters in the game that you can unlock as you level up, and there is no limit to the amount of fun that can be had. As the name suggests, you have to join a clan and build your village accordingly so you can attack other villages and loot gold and elixir from them. This game is interesting as it develops a community with whom you can stay connected all the time. While traveling, you can just sit and arrange your village to create a better defense or attack rival villages to loot resources out of them. The strategy involved keeps you engaged and immersed in the game, and the graphics are certainly mind-blowing.

Vainglory is a multiplayer online base action game that has gained many awards since its release. The best part of the game is that it can be exclusively played online with friends on the same team. You have to choose a character from the catalog provided and compete against an opponent with your mates in this game. There is a range of skills that you can perform with your character after you have farmed and taken your character to a certain level. Each game lasts for a really short period, making the fun more enjoyable. While traveling, the internet is not quite an easy thing to depend on and might fizzle off at any moment. Therefore it is much safer to have short fruitful sessions rather than long continuous games where you might lose a link to the server and lose the round.

Traveling solo may get boring sometimes, and it isn’t easy to carry around board games to play with people. In such cases, online games provide the perfect resort where you can communicate with people on a similar plan and enjoy games with them. The above list is a set of perfect games suitable for long journeys. These games keep you engaged and do not drain much energy from you. It would be best to try out some of these games from the list on your next trip.