House of Cards Season 6: Here’s everything to know regarding the upcoming installment’s release date, spoilers, cast, story, renewal updates, etc. The first question which arises in everybody’s mind is that ‘will House of Cards return for season 6’? Yup, it’s a basic query as the series has been one of the most followed.

The HoC s5 ended with a cliffhanger when Claire Underwood broke the fourth wall for the second time. With it, she announced her own presidency. The season 5 finale made the viewers to think and ask answers to their questions. It left Frank Underwood out of the White House, Thomas Yates dead, and Leann Harvey hanging in the balance.

House of Cards Season 6 Release Date: When Will It Premiere?

Till now, the show has taken breaks for 12-14 months between each season. The first, second, and third installment came in February, fourth released in March, and fifth premiered in May. As per the latest update (August 2018), House of Cards season 6 will release on Netflix on 2nd November 2018.

It is one of the first original content of the Netflix which started airing five years ago. Prior to it, Netflix was only the streaming giant. After it, the streaming company started the production game on its own. HoC revived the Kevin Spacey character. 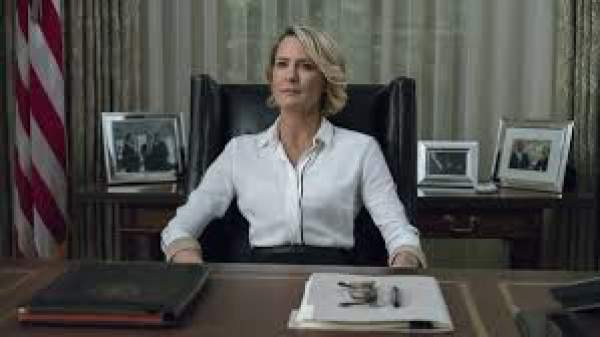 As of September 2017. Speaking regarding the s5, showrunners Frank Pugliese and Melissa James Gibson revealed that they wanted to end the season on a very interesting cliffhanger and ambiguously, and planned it as a potential series finale. They also said that everyone is happy that the viewers are asking for more.

House of Cards Season 6 Story: What Will Happen? (Spoilers)

Without any doubt, the next installment in the series is set around Claire turning into the President. She has become more ambitious or pronounced her ambitions openly. Frank has already enacted his plan to resign. He did to escape from being arrested for the murder of Zoe Barnes. Now, he will go and search power outside of the White House.

You know that the show has been around for power. We have seen that Frank gleefully watched a livestream as the car of Leann Harvey run off the road and she apparently died. Then, there was the horrific aftermath of the crash. But, Leann’s body was never found. It could mean that she is still alive.

The fate of Doug Stamper is also hanging between life and death. It’s because he took the fall for Frank and pleaded guilty to the murder of Zoe. It’s unfortunate, but we will have to wait for another year to see how it unfolds.

No full length trailer video is available as of now except for a teaser clip. However, s6 poster has been released and available below. 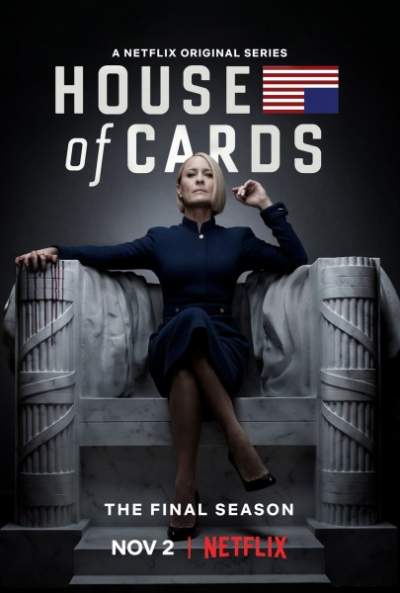 The first seasons had 13 episodes each. But, the last installment of the show will have just 8 episodes. The number was cut short to just 8 after cutting off the entire part of Kevin Spacey after the sexual exploitation allegations. The entire script was changed at the last moment.

The production restarted in January 2018, after being suspended in October 2017.

Whatevery may happen to the original series, Netflix is looking forward to extend the House of Cards brand name by creating related shows. Several pitches for a spin-off are being explored.

One of those ideas is of ex-HoC writer Eric Roth. According to his idea, Michael Kelly will reprise his role as dirty-dealing fixer Doug Stamper working onf new poilitical crises.

Second possibility is to focus on the Washington DC media who brought down the Underwoods. Constance Zimmer and Boris McGiver may feature as journalists Janine Skorsky and Tom Hammerschmidt.

Third possibility is to focus on Wall Street. This can be told/narrated by the big money political power-broker Raymond Tusk or a new mogul.

Which of them you would like? Or do you have one of yours?

The article will be updated regularly. Don’t forget to visit again.